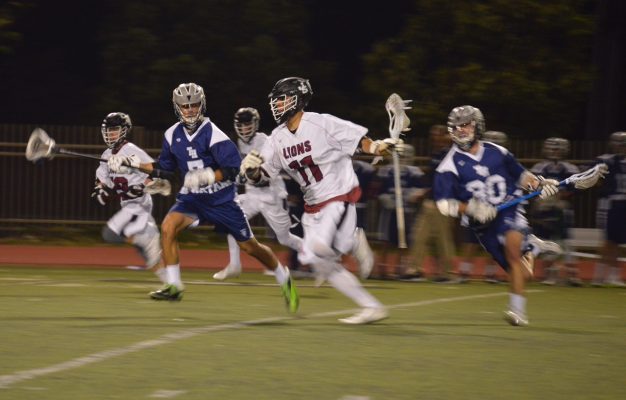 The 1-1 Trabuco Hills Mustangs traveled to San Juan Capistrano to face off against the 2-3 JSerra Lions in a non-league match up on Tuesday, March 15, 2016. The first quarter proved this was going to be a high scoring affair for both teams. Trabuco Hills jumped out to an early 3-0 lead with goals from senior captain Billy Barron (2 goals; 2 assists) off an assist from Wyatt Koudelka (2 goals; 1 assist), John Kauo (1 goal; 2 assists) and Koudelka. As the JSerra defense settled down, the teams traded empty possessions until JSerra midfielder Emerson Roth (4 goals) scored his first and second goals of the evening to bring the Lions within one. The Mustangs were able to regain momentum and squash a mini-run by the Lions with back to back goals by Harrison Evans (2 goals 2 assists) and Jason Kauo (2 goals). The first quarter ended with the Mustangs ahead by a score of 5-3.

The second quarter started where the firstst quarter ended, with the Mustangs dictating the pace of play. Mustangs freshmen attack Holden Evans (3 goals) joined the score sheet with the first goal of his hat trick off an assist from Barron. Evans‘ first and second goals were sandwiched between goals from Barron, Koudelka, and Jason Kauo. The Mustangs were anchored on defense by Jonathan Salgado (3 caused turnovers), Jaryd Flores (4 ground balls), Scott Barger (4 ground balls, 2 caused turnovers, and 2 goals). The Lions finished the quarter with two goals to bring the score to 10-5 at halftime..

The third quarter was highlighted by a point blank save by Mustangs goalie Nick Wilson on an odd numbered fast break by the Lions. Wilson repeatedly came but big for the Mustangs while tallying 10 saves on the night. The Mustangs received goals from both Evans brothers in the third quarter and an unassisted goal from LSM Barger after a great individual defensive effort on a clear attempt take away.

The fourth quarter pace slowed a bit with the Lions’ Roth adding two more goals and the Mustangs getting their final goal of the night from Barger. The Mustangs utilized goals from seven different players to secure the win with the final score of 14-9.

Vincent Cifarelli had four goals for the Lions and Charlie Deamon added one.

Trabuco Hills (2-1) returns to action at home on Thursday, March 17, 2016 in their South Coast League opener against the San Clemente Tritons. JSerra (2-4) hits the road for their next game on Friday, March 18, 2016 against Dana Hills.