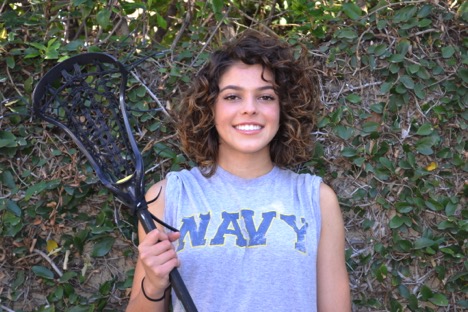 In November 2014, Los Alamitos midfielder  Sophia Schade verbally committed to play NCAA Division 1 lacrosse at the United States Naval Academy for the the NCAA all-time head coach leader in career wins for any division, Cindy Timchal.  In January 2016, Sophia was offered her full appointment to become a midshipman and recently accepted that appointment.  Sophia is now officially on her way to the Naval Academy after she completes her senior year at Los Alamitos!

Sophia is a senior midfielder and a captain of the Los Alamitos Griffins. She is a four-time varsity starter for the Griffins coming off a stellar junior year where she was named an All American, First Team All County, and was the only junior field player in Southern California named to the USA Today All-USA California Girls Lacrosse Team. Sophia is looking forward to a strong senior season with the Griffins and looking toward her future serving the United States of America as a Naval Midshipman.