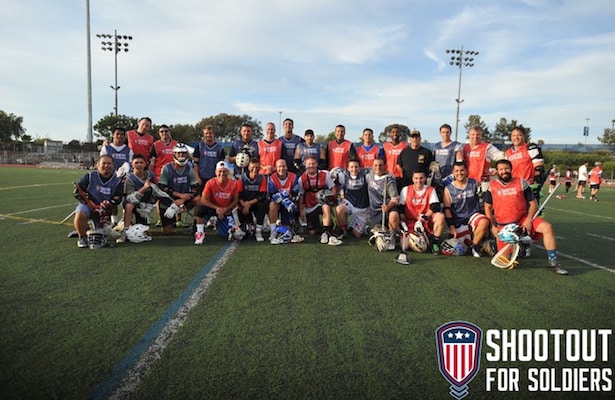 BALTIMORE, Md. – Shootout for Soldiers, the 24-hour lacrosse event, will continue its national expansion in 2016 by adding locations in Texas, Colorado and Georgia. This expands the Summer Tour schedule to eight events in total, including previous locations in Maryland, New York, Ohio, Massachusetts, and California. In 2015, the organization raised $408,000 through the support of over 6,000 players and 46,200 attendees.

The nationwide expansion comes as a result of applications from over 120 different locations to host the event. “The event continues to grow and expand because the lacrosse community nationwide recognizes the need to support our nation’s veterans and is committed to leading that charge,” explains Tyler Steinhardt, Founder and Director of Shootout for Soldiers.

The Shootout team has witnessed an idea they had in high school explode into a nationwide phenomenon and credits the hard work of their all-volunteer staff. Steinhardt continues, stating that “Our local event organizers have driven this event and its goals to support our nation’s heroes, and it’s both inspiring and humbling to be a part of such an amazing team of dedicated patriots.”

The growth of the event is also largely attributed to the redesign of the event experience. With the addition of live music, a variety of activities, sponsor and beneficiary booths and a barbeque, all attendees have the ability to take part in the day-long event.

Those interested in participating in the events can begin to register on March 1st at www.ShootoutForSoldiers.com. The games are open to both male and female teams of all ages, with honorary Veterans games opening each event. Summer 2016 events will begin in Boston, MA on June 3 and 4; Baltimore, MD on June 22 and 23; Atlanta, GA on July 2 and 3; Houston, TX on July 8 and 9, Columbus, OH on July 16 and 17; Long Island, NY on July 21 and 22; Denver, CO on July 28 and 29; and concluding in Dana Point, CA on August 6 and 7.

ABOUT SHOOTOUT FOR SOLDIERS:

Started by a group of high school students in Maryland, Shootout for Soldiers is a 24-hour lacrosse game benefiting our nation’s heroes. The mission of Shootout for Soldiers is to use the platform of lacrosse to engage communities with their local veterans and support their healthy and successful transition into civilian life. By raising more than $900,000 since its inception in 2012, Shootout for Soldiers has helped provide financial, physical, and emotional support and services to United States service men and women. To learn more, please visit www.ShootoutForSoldiers.com or follow @SFSLacrosse on Twitter.