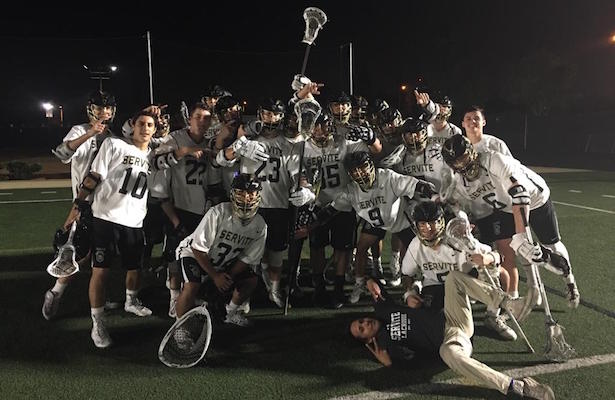 Chase Anderson scored the first goal of the game and the last goal of the game to give Servite an 8-7 win over Newport Harbor on Friday.  Anderson’s first goal tied the game at 1-1 and his second goal broke a 7-7 tie with less than two minutes to play to secure the win.  The resurgent Friars begin the season with a 2-0 record for the first time in program history.

The game was a nip and tuck affair from beginning to end.  The Friars never trailed after Anderson’s first goal but were never able to pull away either.  The Friars led 3-2 after the first quarter, but the Sailors scored the only goal of the second quarter to make it a 3-3 tie at half time.

The second half was no less taut than the first half. Newport Harbor tied the game three times during the fourth quarter (5-5, 6-6, and 7-7. Each time the Friars responded with a go ahead goal. Kyle Cartwright led the Servite attack with a hat trick.  Anderson and Stephen Shatynski each scored two goals and Brock McClure netted one. Servite’s young starting defense of sophomores Hayden Rodenbeck, Jack Seals and Keith Terrones teamed up with LSMs Brandon Box and Matthew Ellern at LSM to keep the the talented Newport Harbor offense in check. Stats for Newport Harbor were not available.

Next up: Servite (2-0) plays Great Oak on Tuesday and Trabuco Hills on Thursday. Newport Harbor (0-2) plays Mira Costa on Wednesday and Santa Margarita on Saturday.