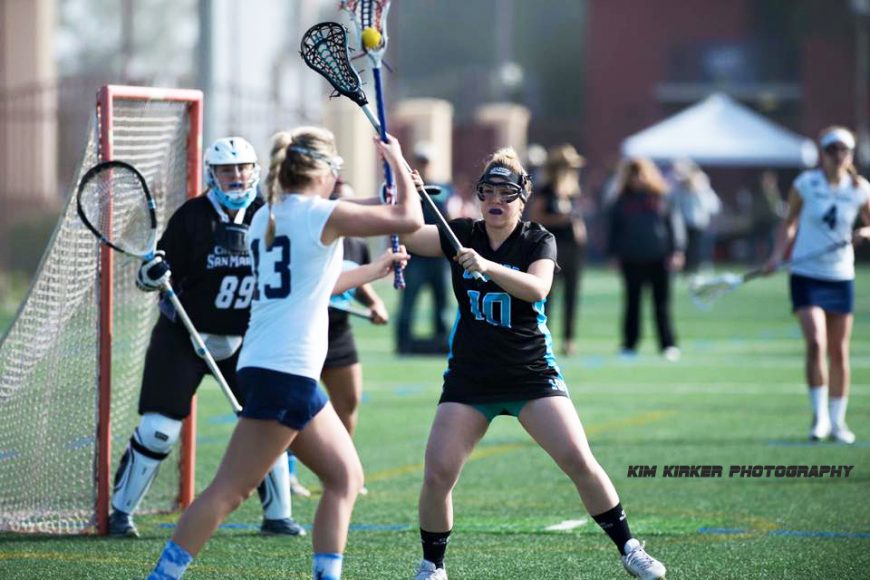 After an undefeated tournament record at the Santa Barbara Shootout, the CSUSM Cougars now rank No. 1 in the South Conference of the Western Women’s Lacrosse League.  The Cougars benefitted from the contribution of several Orange County alums.  Midfielders Madison DuMond and Marina Sandoval are from Trabuco Hills, midfielders Madison Larsh and Emma Kirker are from El Toro, senior defender Nicole Robertson is from El Dorado, and attacker Brittney Buerk is from Los Alamitos.

“I would like to just say how proud I am of my team in how hard they worked in every game, ” Head Coach Chelsea Hargatt says of the Shootout, “Having four games in one weekend isn’t easy, but they gave it everything they had to pull out four wins.  Being a relatively new team, I was very excited to see how well they all connected.”

What kind of team perspective did you and the other Cougars bring to Santa Barbara?

Rachel: We all came to the Shootout with the purpose to grow as a team. We intended to set the tone for the entire season by showing others how much time and effort we put into this program. My team was determined to set a higher standard for a division II club team.

What do you have to say about the SB lacrosse experiences you’ve had with your team?

Nicole: I have been to four; this past weekend was my last one. My SB lacrosse experiences have always been good, and it’s a time that I always bond with my team. The weather is perfect, beach is beautiful, food is great, the general atmosphere is just love for the game. It’s a time to grow as a player, grow as a team, and I find myself falling in love with the sport again every time I visit. When you’re stuck in a car with your teammates for 5 hours, then have to sleep next to them all weekend, and then go through the ups and downs of a game, it really bonds you all. That bond then transfers to the field, and makes for better chemistry and better play.

What was going through your mind playing keep-away in your 1-goal win over Utah State?

Rachel: My initial thought was “Whatever you do, do not drop that ball.” Luckily, I had faith in my teammates and myself. This game created a new element of trust within our team.

Who are impact players on your team?

Nicole: When I think of impact players, I think of Madi Larsh, Kaylee Crivello, and Emma Kirker. Those three girls are versatile players that make plays no matter where they are on the field. They make for a killer midfield line.

On defense I have to give a shout out to CJ Enriquez and Dragon Rillo. Those two grab every ground ball, catch every cutter, and stop every crease roll.

Have any players made significant improvement recently?

Nicole: Heather Snider our freshman goalie has made huge improvements already this season. I see her improving every game, and gaining confidence in her abilities.  Straight out of Fallbrook high school, she’s already making waves in our league.

Were you guys pumped or tired by the third day of the #SBSHOOTOUT?  What kind of effort went into your final victory?

Rachel: In all honesty, I could tell we were lacking in energy due to the long hours in the sun as well as sharing a hotel room with 5-6 other teammates. However, it was still evident that we had the motivation to stay undefeated. We were willing to sacrifice our sleep schedule and sunburns for the opportunity to beat Stanford.

How do you feel coming away from the Shootout with an undefeated record?

Rachel: I feel amazing. This tournament demonstrated our strengths and weaknesses as a team. Now that we have returned to San Diego, we know exactly what we need to work on in order to continue bettering ourselves as a whole.

What impact do you want to leave on your team when you graduate?

Nicole: When I was a freshman we lost more games than we won. When I was a sophomore we won a few more games, still lost a few more. When I was a junior we just wanted to make it to playoffs, and we did. And we also made it to nationals, which was insane and way more then we had expected for the season. Here in my senior year, I hope for the same, to win more then we lose, to make it to playoffs, and to make it to Nationals. And if that happens, we will have reached our goal, but I hope for more even after I graduate. I hope that we will continue to help the San Diego lacrosse community and grow the game. I hope on campus more students learn about our team, and follow us on our journey. I hope that within the team players find their best friends in their teammates, and are able to use this team as their escape from reality and their hectic day. I hope that lacrosse empowers my teammates to do well in school, and try new things, and go out of their comfort zone. I want the team to continue to grow, and excel, and I want to keep this game fun, and mostly I want lacrosse to be their favorite part of college, because that’s what it was for me.

Rachel: Nicole Robertson, Megan Guilfoyle, Emily Snow (Class of ’15), and I have worked countless hours to make this team the best we could both inside and out. I want to fuel the fire of other potential leaders to step up and continue to grow this program. I have high hopes that one day our university will reward all of the hard work put into this student ran organization by creating an NCAA program.

Lady Cougs closing this weekend undefeated! Thank you to all the fans who supported us! Till next weekend! #CSUSM pic.twitter.com/1xMz9XYQJh

The Cal State San Marcos Cougars look to continue their success into the finals of the WCLA tournament in North Carolina this season.  Follow them on @CougarLacrosse!