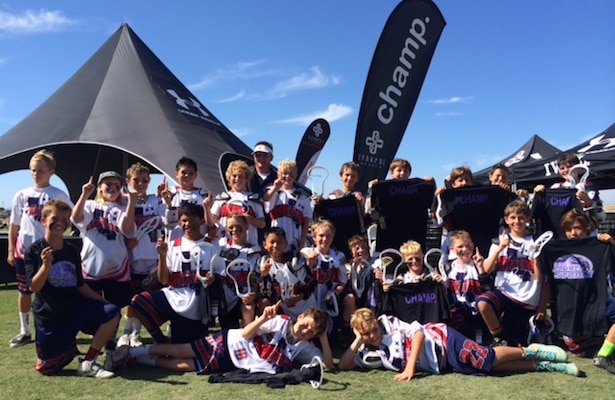 In Orange County, the organization that oversees youth and middle school lacrosse is the Orange County Lacrosse Organization (OCLA). The OCLA organizes leagues for both boys and girls in Orange County, often having Winter and Spring leagues.  The OCLA games are played locally at field throughout Orange County.  For a list of the local, independent teams that play in the OCLA leagues visit oclax.com.

The CIF-SS is the largest section in California.  Nearly 600 high schools in Orange, Los Angeles, Riverside, San Bernardino, Ventura, Santa Barbara, San Luis Obispo, Mono and Inyo counties fall within the jurisdiction of the CIF-SS.  Although lacrosse has been a CIF sport in the OC since 2007, CIF does not sponsor a postseason playoff like it does in most other sports. CIF-SS will not sponsor a playoff system unless at least 20% of the member school participate in the sport.  Currently, both boys and girls lacrosse fall short of this target.

In place of a CIF postseason system, the Orange County chapter of US Lacrosse hosts a post season tournament that represents the Southern Section lacrosse playoffs.   The Los Angeles chapter does the same, and the OC and LA champions meeting in the US Lacrosse Southern Section Championship Game. In addition to organizing the high school playoffs, the Orange County chapter of US Lacrosse helps organize and promote events such as NCAA college games being played in the OC area. The national US Lacrosse organization provides many services, resources, and events throughout the country to foster the growth of the game.

At the collegiate level, there are various leagues of play for both men and women. The highest level is NCAA Division I lacrosse – schools like Denver, Johns Hopkins, Duke, Virginia, Notre Dame, Army, and Harvard, all with varsity collegiate lacrosse programs. Some women’s programs on the West Coast are also Division I, such as Oregon, Cal-Berkeley, Stanford, and USC, although most men’s teams have not yet made the jump from club to NCAA. Below NCAA Division I are two other groups of varsity collegiate teams: Division II and Division III. Schools in these divisions tend to be smaller than Division I schools, but remain incredibly competitive.

There are also many strong Junior College varsity lacrosse programs offered for men and women at many East Coast community colleges through the National Junior College Athletic Association (NJCAA).

There is also a men’s club lacrosse league for community colleges in California, the California Junior College Lacrosse Association (CJCLA). Although these schools are primarily in Northern California, some Orange County junior colleges have expressed interest in joining this league in the near future.

Collegiate club lacrosse opportunities also abound. For men’s lacrosse, the largest club league is the Men’s Collegiate Lacrosse Association (MCLA), which encompasses over 200 teams including UCLA, Stanford, Chapman, Boston College, Florida, Arizona, Sonoma State, Texas, Colorado, and many more. The MCLA itself has a Division I and Division II split based mostly on school size, and seriousness and competitiveness varies greatly from team to team regardless of Division. The top teams in the MCLA often scrimmage NCAA Division II and III, routinely winning against the varsity competitors.

For women looking to play at the collegiate club level, the Women’s Collegiate Lacrosse Association (WCLA) is the main league, featuring many of the same schools as the MCLA. The WCLA, which like the other collegiate club leagues features a Division I and II breakdown, is run by US Lacrosse, whereas the MCLA and NCLL are not.

Another men’s collegiate club league is the National College Lacrosse League (NCLL), which provides club teams at schools that already have varsity teams, making it the JV team of sorts for schools like Virginia and Rutgers. The NCLL has two divisions just as the MCLA does.

At the post-collegiate level, the Southern California Post Collegiate Men’s Lacrosse League (SCLAX) fill the void. This league features about 10 teams from San Diego to Los Angeles who compete in the Spring, with the winner of the SCLAX playoffs meeting the winner of the Northern California companion league in the Post Collegiate State Championship Game. While there have been various OC teams in SCLAX in the past, currently the Newport Beach Lacrosse Club is the primary post-collegiate team in Orange County.