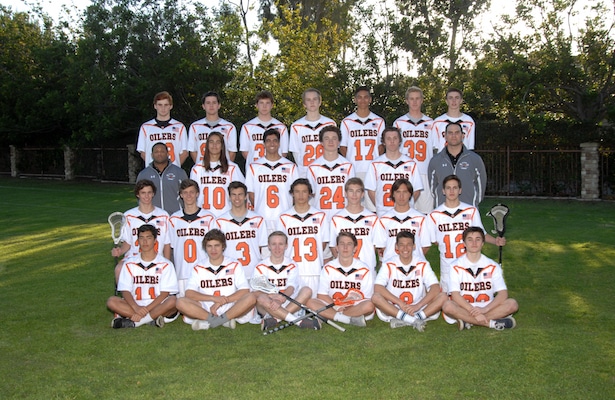 Huntington Beach goalie Grady Mercier came up big for his teammates Tuesday. Mercier’s 1 v 1 save on freshman Sean Waterman with just a few seconds left in the game shut down a late comeback attempt by Mater Dei, and sealed a season opening 8-7 victory for the Oilers. In what seemed to be a theme for boys’ lacrosse in Orange County Tuesday night, both teams were making their debuts under the leadership of new head coaches.  Ryan Kelaher for the Oilers, Johnny Rodriguez for the Monarchs.

Huntington Beach jumped out to a 5-2 halftime lead on the strength of three goals from Ayden Colbert,and one apiece from Michael Goodheart and Ricky Masters. Jack Southron and Brady Burwell tallied in the first half for the Monarchs.

Huntington Beach came out strong in the second half and stretched their lead to 7-3 before Mater Dei staged their comeback attempt midway through the fourth. Southron’s third goal of the game with 49 seconds left made it a one goal game. Mater Dei came back after the faceoff and got the opportunity they wanted, but Mercier was there to keep the game out of of overtime and secure the 8-7 victory.

Both teams showed some early season rust during the game. Eleven penalties gave the Oilers’ man-down unit, anchored by the strong play of Mercier and the defensive unit of Sean D’Zumra, Jeremy Anderson, Brandon Womble, and Masters plenty of early season practice. Their ability to prevail was a difference maker in the game.

Colbert was the leading goal scorer for the Oilers with three. Goodheart finished with two goals and two assists. Leighton (1g, 1a), Masters (1g), and Grant Feiwell (1g) also tallied points for Huntington Beach. Southron led the Monarchs with three goals and an assist. Sando finished with three points (1g, 2a). Zach Johsz, Waterman,and Burwell all had single goals.