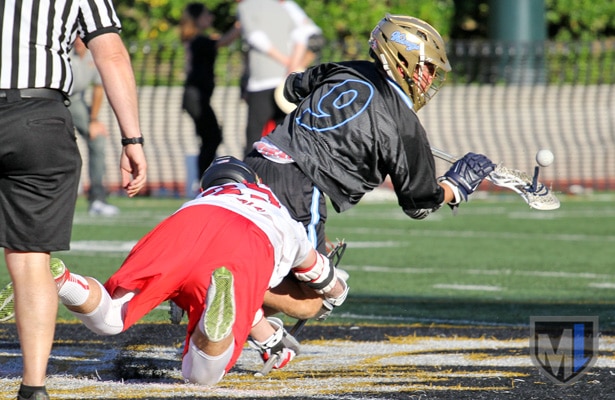 Jason Simaan and Jordan Greeenhall had career nights on Wednesday to help Corona del Mar outscore El Toro 19-5.  Simaan won 17/18 faceoffs and Greenhall racked up eight points (6g, 2a) to lead the Sea Kings to a 19-5 victory over El Toro.  It was the first game of the season for the Sea Kings.El Toro falls to 1-2.

El Toro hung right in there with CdM during the first and four quarters, but the middle of the game was a different story.  Clinging to a 4-3 lead after the first quarter, CdM blew the game open with 15 unanswered points in the second and third quarters.  The Chargers scored the only two points of the final frame.

Even with Greenhall’s six goals there was plenty of CdM scoring to share.  In addition to Greenhall, a dozen Sea Kings collected their first points of 2016.  Eric Fries (4g, 1a) and Will Favreau (3g) were the only other Sea Kings with multiple goals.  Stephen Von der Ahe had a nice all around effort with one goal, two assists, and three groundballs.  Sachin Gokhale (1g, 1a), Ryan Meckler (1g, 1a), Nate Neumann (1g), Simaan (1a), Will Cord (1g), Brennan Greenwald (1a), Grant Spruce (1g), Jack Denning (1a), and Landon Whitney (1a) all picked up points. Nick Guizan had 5 saves.  Matt Saucedo was 5 for 8 on faceoffs.

Chris Garcia led El Toro with two goals.  Tyler Collins had a goal and an assist.  Jared Vlach and Jack Vandenburg each had a goal.  Parker Matthews handed out two assists.