Yorba Linda Gets the Better of Huntington in OT 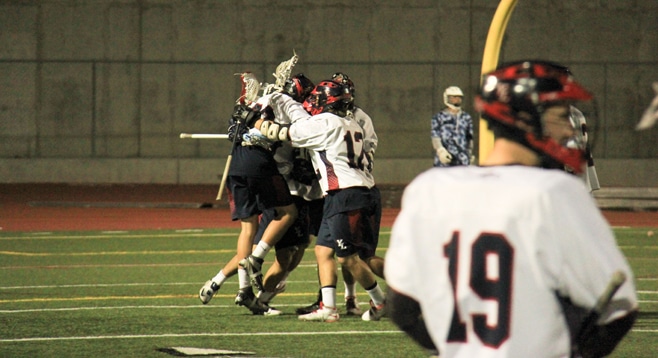 One of the best kept secrets in Orange County Lacrosse is the competitiveness of the Yorba Linda Mustangs who hosted the Huntington Beach Oilers Monday night.

Because of multiple injuries and setbacks, the Oilers roster looks much different than it did at the beginning of the season. Despite the changes there was a constant; Daniel Schulze (6 goals). Schulze came out firing and scored the first two goals of the game putting the Oilers up 2-0. Yorba Linda didn’t let the two quick goals get them down and struck back with three in a row from Jake Norton, Ryan Viadero and Brandon Cyprien. Shoulezee wasn’t done and scored again to finish off his first quarter hat trick to tie the game at 3-3 at the end of the first.

Senior faceoff-attackman Sean Mastro (3G, 2A) built on Schulze’s momentum assisting a cutting James Sidrak finished on Mustang goalie Mark Rentfro. Mastro then finished from the island by himself to extend the lead to two. Kaidon Newberry answered with a smooth finish fading away from the island to narrow the lead to one with four minutes left in the half. After this score, and for the rest of the game, play would be increasingly sloppy as the game started to slow down.

The temperature dropped to below 60 as both teams took the field for the second half. The pace of the game also dropped and the third quarter seemed to be a back and forth battle on the ground and in the clearing game. Settled offense saw lots of unforced turnovers but also saves by Rentfro who had a much better second half than first. It took 8 minutes for the first goal of the second half to be registered but it was Schuzle again for the Oilers who pushed Huntington’s lead back to two. Immediately off the next faceoff Newberry finished inside to keep the Mustangs within one. Mastro then powered through two slides and three total defensemen to score with 50 seconds left in the third.

As the game became tighter both teams abandoned settled clears and turnover after turnover between the restraining lines set up a few broken play goals for both teams. Mastro’s final of three goals to give the Oilers the one goal lead with four to play. Huntington managed to hold the ball off the ensuing face off until the final minute and a half when Yorba Linda tied the game off a timeout to send the game to overtime.

Huntington held possession in overtime dodging relentlessly for two whole minutes until the ball was given up and the Mustangs took a timeout after the clear to set up their final play. Viadero took it from the top and dodged all the way to X where he found Norton on the crease for the game winner. This was the first lead for the Mustangs since the first quarter but it was the only lead that mattered as they went on to win by a final of 9-8.

1. Jake Norton, Yorba Linda: The man with the game winner couldn’t be denied all game. Norton and Viadero were fun to watch as they combined for most of the Mustang’s offense.

2. Daniel Schulze Huntington Beach: The crafty attack man had six goals on the night which deserves a double tip of the hat (trick).

3. Kevin Anthony, Yorba Linda: As big and physical as any defensemen in the league, he finished the game with strong clearing when it counted for the Mustangs.