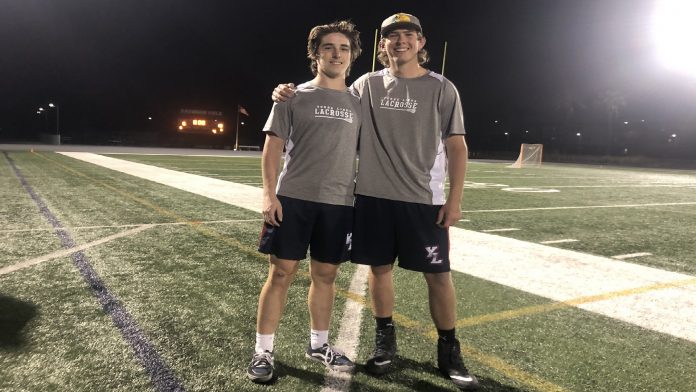 “I think we really got on groundballs and we kind of controlled that. But for a good portion of the game, we started working as a team together,” Mustangs coach Mike Schreiber said.

After the two teams were tied at 1-1 in the opening quarter, Yorba Linda tried to pull away with goals from Bohlinger and Hardison in the first minute of Q2 to take a 3-1 lead. However, the Sailors defense was holding strong and held the Mustangs scoreless for the rest of the quarter Logan Atkins scored his second goal of the game with 12 seconds remaining to cut the lead down to 3-2 before the first half clock wound wound down.

Yorba Linda led 4-3 after scoring at the 10:19 mark, but was held scoreless the rest of the quarter. While the Sailors were able to maintain possession of the ball due to their stingy defense, they tied the game courtesy of Charlie Durante and took their first lead courtesy of Owen Brosnan, who scored at the 3:20 mark.

Yorba Linda came alive in the third quarter scoring four unanswered goals and making sure that it had control of the ball. The Sailors salvaged a late goal courtesy of Luke Barnes, but the Mustangs led 8-6 heading into the fourth quarter.

“Our defense, keeps high-powered offenses like this at 10 points. Mike’s a really really good coach and they got really good ball players on that team,” Sailors coach David Todd said.

Yorba Linda kept Newport Harbor off the scoreboard the rest of the way, as they scooped up groundballs and made sure the hosts never got a full ride. The Mustangs also made the most of their offensive possessions even when they didn’t score, as they chewed up most of the clock and eventually celebrated victory.

“The one thing I’m loving [this season] is they [Yorba Linda] will not quit, they’re going to play a full 48 minutes no matter what. The beauty I think is that we still have a lot of growth, we can definitely improve in shooting, just controlling the ball on offense and not forcing things and tightening up our slides,” Schreiber said.

Barnes and Atkins each had two goals for the Sailors while Brosnan and Durante each had one goal. Jerome Snyder made nine saves for Newport Harbor.

Todd also pointed out that his team need play a full four quarters if his team wants to be successful going forward. The Sailors, in four of their five losses on their current losing streak, have been competitive, but have faltered in the second half.

“We’re in contention, it’s just we have to be able to close the deal. It takes pride and commitment from all of our boys and hopefully when football [season] is over, we have all of our boys back,” Todd said. “We got exactly one half a season left.”

Next up for Yorba Linda (5-1) a road matchup on Monday at Los Alamitos, in a game that was postponed, at 7 p.m. For Newport Harbor (3-6), it returns to action on Tuesday at home against St. Margaret’s at 7 p.m.