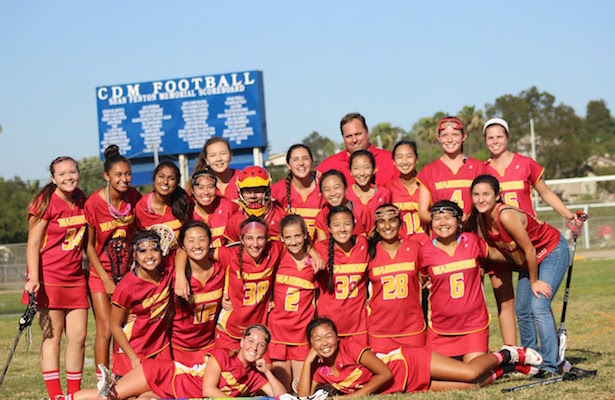 At that point the possession battle turned as Woodbridge won seven of the next eight draws, led by draw specialist and attacker senior Karina Yamasaki and San Diego State bound senior Jenny Buckland. Yamasaki and Woodbridge sophomore Sophia Silane converted key scoring opportunities and the game drew level at five apiece. Mulvaney scored in the last minute of the half to restore the CDM lead just before the break.

The second half was a back and forth battle both on the draw circle and on the scoreboard. Jensen Coop, Lauren Grable, and Paige Nelson led a balanced attack and tenacious transition effort for CDM while Yamasaki began to find her scoring groove for the Warriors, eventually scoring a game high nine goals on twelve shots. With 3:30 left to play, CDM tied the game at 13, capitalizing on a late Woodbridge yellow card and executing some intricate interior passing. Yamasaki then won the ensuing draw, received the ball below goal line, and defeated a CDM double team to give the Warriors the lead. Woodbridge won the subsequent draw and held the ball for two minutes, before turning the ball over in the face of swarming pressure. A wild scramble for possession ensued and senior Woodbridge goalie Brandy Bowman made a pair of clutch saves to preserve the 14-13 Woodbridge victory.

Next up: Woodbridge hosts Northwood on Monday.  CdM travels to Uni on Monday.