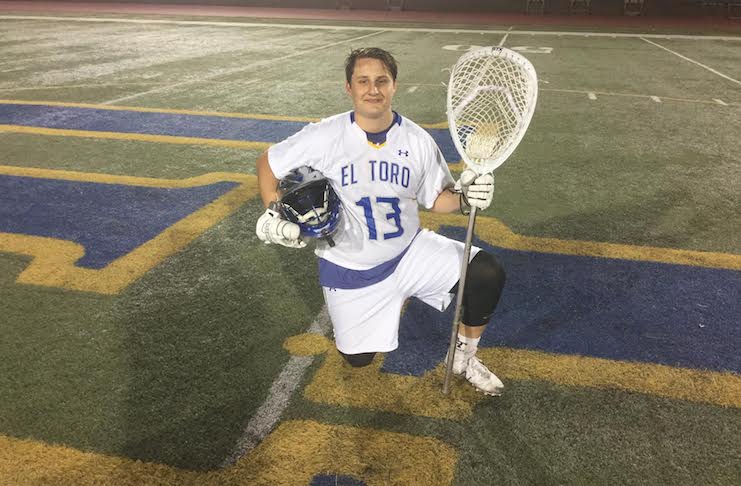 El Toro junior goalie AJ Sherer is the Athletes Choice Workhorse of the Week. Sherer’s play between the pipes has been instrumental in several key wins for the shorthanded Chargers this season and has the program buzzing.   Nobody appreciates Sherer’s importance to the team more than head coach Chris Nunziata.

“We are incredibly lucky to have AJ in our program,” Nunziata said via email. “He gives us a chance to win any game and he competes non-stop regardless of the game or score. I think all lacrosse players know how tough you have to be to play between the pipes and AJ is no exception to the this.”

Two weeks ago Sherer had 30 saves in two games in back-to-back days for an injury-plagued Chargers team. Besides his ability to save balls from getting past him in the net, Nunziata see multiple strengths in his goalies game.

“One area of AJ’s game that he has worked on is his clearing game,” Nunziata said. “He makes good passes to our midfielders which allow them to turn upfield and make a play after they catch the ball.”

El Toro has won five of their last six games and possess a current record of 7-5.

Athletes Choice is the Premiere Lacrosse Training Facility on the West Coast. We offer Lacrosse Performance classes for all positions, boys and girls as well as for all ages and skill levels. Former Division I and current MLL lacrosse players with years of coaching and training experience instruct our performance classes. We focus on pairing lacrosse skill development with strength, power, speed and agility resulting in all around lacrosse athletes. No matter what position you play we have a program for you. First 3 classes are always FREE!!!
Website: www.athleteschoicersm.com
Instagram: @athleteschoicersm
Facebook: Athletes Choice
Twitter: @athleteschoice2
Previous articleCrescenta Valley Bounces Back with Upset of Birmingham
Next articleSt. Margaret’s, Mount St. Joseph Renew 12-Year-Old Tradition
MaxLaxAll Lacrosse. All the Time.
Southern Section Boys