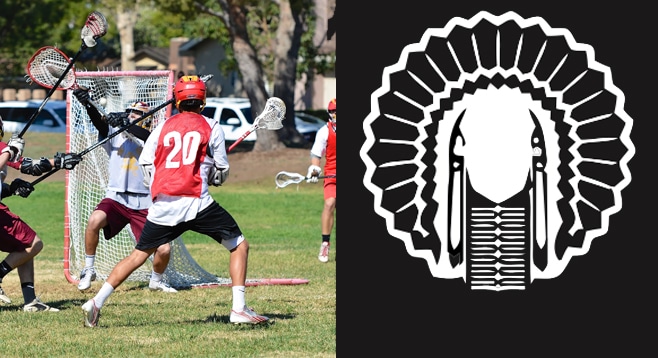 The Tribz Lacrosse Winter League concluded on Saturday afternoon with a pair of semi-final matchups and the championship matchup at Venado Middle School in Irvine. The Bulls emerged from the regular season, which began before Christmas, as the #1 seed for the playoffs, followed in order by the Tomahawks, the Navigators, and the Lightning. The Bulls feature players from Woodbridge High School. The other three teams feature players from Esperanza High School, Newport Harbor High School, and Sage Hill Academy, respectively.

Number 1 seeded Bulls finished the season as league champion following a tightly contested 8-7 win over the Tomahawks in the championship game.

Semifinal: Tomahawks 8, Navigators 7
The Tomahawks nabbed the two seed going into the weekend after finishing 7-1-1 and Mark Todd’s Navigators the three seed. As expected, this game was a close one, coming down to the wire with seconds to go.

The Tomahawks’ sophomore standout Jake Aho opened up the game with a goal in his team’s first possession. The Navigators quickly countered with one of their own. Esperanza star Bryce Ippolito got one back for the Tomahawks to make it 2-1.

The Navigators stormed back with four unanswered goals by Chris Buchanan, freshman middie Ryan Simons, senior Alex Fuller, and John Mooers to give the Navigators a commanding three goal lead. Aho brought the Tomahawks to within two goals but Fuller responded with his second goal of the afternoon to make it 5-2 in favor of the Navigators at halftime.

A total of four penalties in the closing 10 minutes including a three minute unreleasable stick penalty at a great inspection request by Tomahawks head coach Deron Hansen (coaches can ask for one free stick check a game without loss of a timeout) sealed the Navigators’ fate. Up 7-4, the Navigators allowed three of the Aztec’s next four goals on man down situations. Esperanza was able to take advantage and pull off the 8-7 win.

The laws of season competition held true as the two best teams squared off in the finals, #1 seeded Warriors took and #2 seeded Aztecs. Another huge comeback swing this time not aided by penalties made this game really exciting to watch

Esperanza took command of this game early. Aho scored a ridiculous diving goal and Ippolito ripped from the wing to give the Aztecs a serious two goal lead. Goalie Nick Carpenter looked especially strong in goal throughout the first half. It would take 10 minutes for Woodbridge’s first goal of the game but the wait didn’t seem to hinder the Warrior’s momentum or hopes in a comeback.

Down two goals with less than three minutes to play Christian Keena and Ben Robertson both finished unsettled goals that finished a four goal comeback for the Warriors.