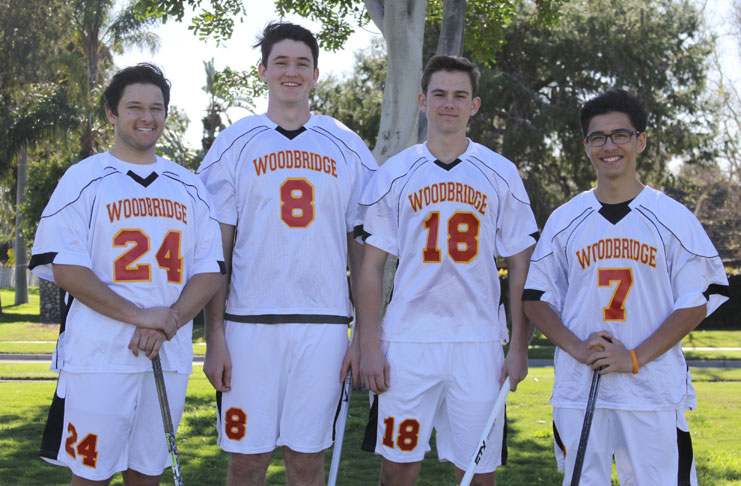 Senior Zac Jacobs is a returning captain.  He was voted “Offensive player of the year” his junior year. Jacobs started playing lacrosse in the 7th grade with the Newbury Park Prowlers. He has played for club teams such as Buku, Irvine Rangers and Rage Beyond.  He has a passion for the game and hopes to play beyond high school.

Craz on Jacobs: “Zac is a four-year varsity player at Woodbridge who will serve as the offensive captain of the team. In the past two seasons, Jacobs has racked up a total of 52 goals and 39 assists from the midfield and attack positions. His game experience will come in handy when the scores get close.”

Senior Jacob Henderson started playing lacrosse in 6th grade. He originally wanted to play attack but didn’t get much playing time so he made the switch to defense. Ever since then he has played close defense and is always excited to be a part of lacrosse.

Craz on Henderson: “The senior defensemen that will lead the Warriors this season is Jacob Henderson. Jacob is a rare physical talent at close defense but can also handle the ball in space. Jacob is a 3-year player on the team who is a great motivator and excels in the classroom.”

Junior Brad Walsh has played lacrosse for WHS since freshman year. He was awarded WHS’ letter (“W”) for his freshman and sophomore years. Walsh alternates between the LSM and close defense positions.  Brad started playing lacrosse when he was in 6th grade with Irvine Lacrosse.

Craz on Walsh: ” A junior defender who has been part of the program for three years, Brad has been a vocal leader and a prime example of being a stellar student athlete. Walsh will captain the midfield at Long Stick as a defender, but has an ability to score in space.”

Junior James Nakano is the team goalie. He played baseball, basketball and golf growing up and was introduced to Lacrosse his freshman year. He immediately developed a love for the game and it has been his main sport ever since. This is his second year as the starting goalie for the Woodbridge team and he hopes to continue playing after high school.

Craz on Nakano: “Nakano has shown leadership, poise, and a sure hand in the goal. Nakano, who has been a feature at goal all offseason working on positioning & fundamentals, has shown an ability to get the ball in transition off a save.”

All players named captain are chosen by the coaching staff, based on attitude, experience, skill, leadership qualities, and excelling in the classroom. Woodbridge lacrosse is proud of their leadership and know that they will represent the team honorably.