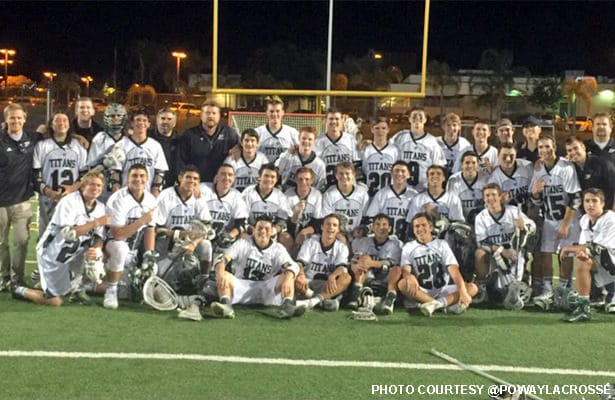 Poway’s Jack Woodard likes to play his best lacrosse when the stakes are highest.  Just as he did in last  season’s title run, the junior attack is elevating his game in the games that matter most.  Woodard collected seven assists against La Costa Canyon on Wednesday to lead the Titans’ balanced scoring attack to a convincing 16-8 victory and a return trip to the CIF Championship game.

The Titans all seem to be playing at the top of their games, as they have rolled over their last four opponents (two of them in the playoffs) by a combined score of 70-16. Wednesday night’s eight point margin was the closest game of those four.

Credit Poway’s balanced scoring attack and shutdown defense for the hot streak. On the offensive end, Poway got goals from eight different players. Sophomore attackman Harrison Greaves led the way with 4 goals, and sophomore midfielder Kienan Morrissey, who has steadily worked his way into the Titans offensive scheme in the second half of the season, added two. Poway’s big guns got involved as well, with  scoring leader Nick Beeson (Bryant) adding three goals, and senior midfielders Zach Hodge (Cleveland State) and Brad Belasco (Westminster) scoring two each. Sophomore middie Kobe Brown added one more and senior defenseman Bailey McLaughlin (Colorado Mesa) scored on a coast-to-coast gem for his 5th of the season.

The Poway defense held form throughout the game, giving the Titans leads of 9-3 at halftime and 14-4 after the 3rd quarter. Senior FOGO Zane Abbott (Southwestern) continued his strong season at the faceoff X, keeping the Titans on the attack for most of the night. LCC was never able to mount a serious rally against McLaughlin, goalie Kellan Cutting and the rest of the Titan defense, and as a result Poway advances to play this weekend for the championship.

The loss puts the Mavericks’ final record at 15-7 for the season, while the Titans move to 17-3 and will play Torrey Pines for the San Diego CIF Open Championship on Saturday at 7PM at Granite Hills High School.