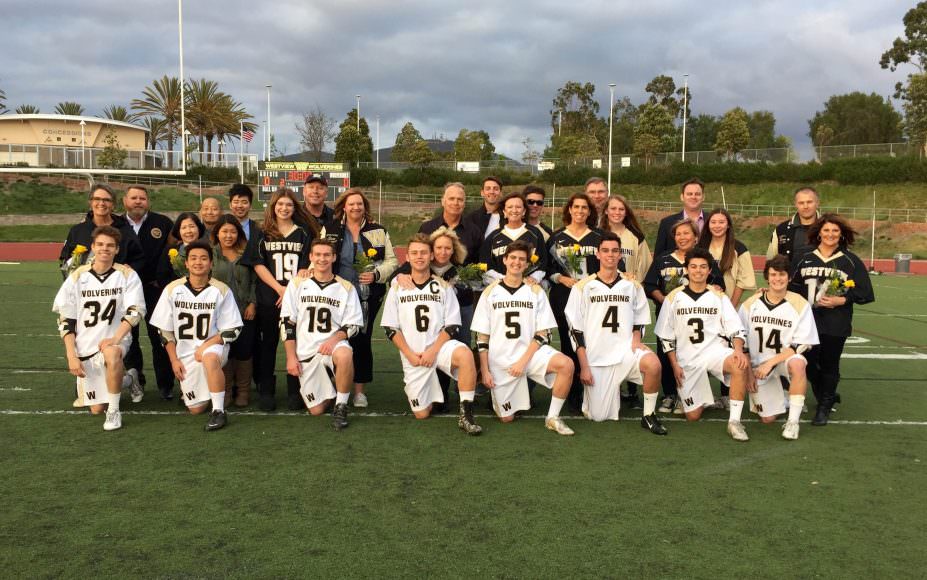 The Westview Wolverines topped the Patrick Henry Patriots 17-10 this past Thursday night to improve to 12-4 on the season. It was a special night as Westview honored its eight graduating senior teammates pictured above left to right: Matt Francis, Keith Lin, Sean Clancy, Hans Gieschen, Jared Nagro, Joseph Wilk, Dylan Wilson and Spencer Morrison.

The Wolverines got off to a quick start going up 2-0 with goals by seniors Spencer Morrison and Dylan Wilson. While the Wolverines were up 3-1 at the end of the first quarter, an illegal stick that caused a one minute, unreleasable penalty gave the Patriots the man advantage for one minute, which lead to two goals to even the score at 3-3. The Patriots piled on another 4 goals to amass a six goal unanswered scoring run, taking the lead 7-3 with a little over 6 minutes remaining before half time. The Patriots used good ball movement and great finishes led primarily by Patriot attackman Camden Ledford who ended up with 4 goals in the game. However, the tables turned significantly in the final 6 minutes of the 2nd quarter as Westview went on its own scoring run with 5 unanswered goals to take the lead 8-7, but not before Patrick Henry was able to even the score 8-8 right before half with an empty net goal on a failed clear by Westview. In the second half however, it was all Westview as they controlled the game in all facets by scoring 9 goals and holding the Patriots to only 2 second half goals on the defensive side.