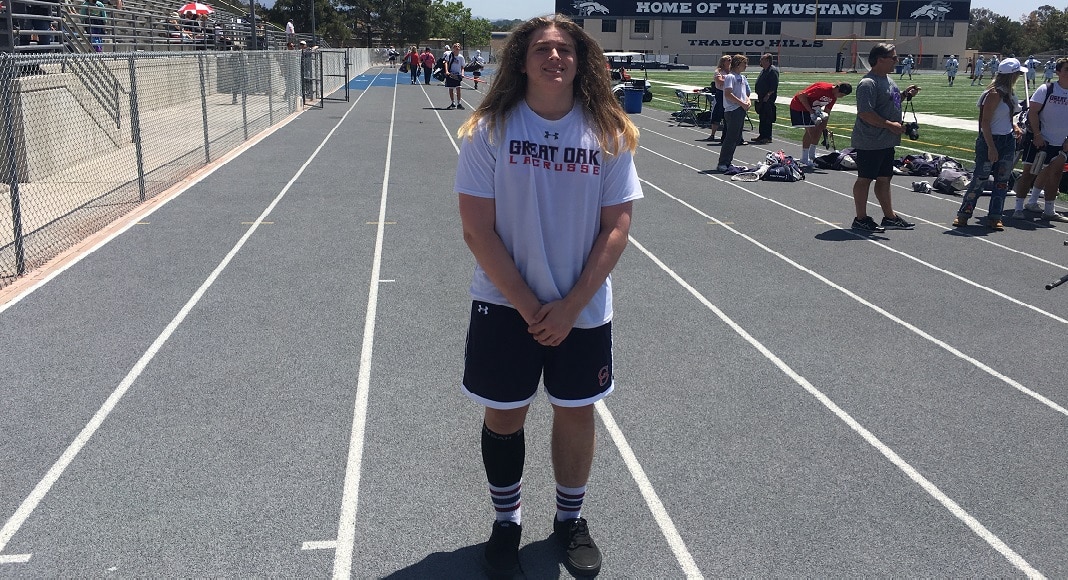 The Great Oak boys’ lacrosse team may have taken one giant step forward in the rankings after ending its regular season with an exclamation point.  Down by seven goals to Trabuco No. 5 Hills at one point, the No.9 Wolfpack came roaring back to steal a 14-13 victory on the last day of the regular season.

The Mustangs looked to still be riding high from winning the South Coast League against rival San Clemente earlier, and scored the first four goals of the game. The Wolfpack were plagued by seven penalties in the first half and were still struggling to find their flow when they ended the first half down 7-3.

The second half didn’t start any better than the first half for the Wolfpack as they watched Trabuco build up an early 10-3 lead.  As the game progressed though Great Oak started to build momentum and they were able to rein the Mustangs back into an 11-7 game as the fourth quarter began.

The Wolfpack started to make their comeback by scoring three out of the next four goals making Trabuco Hills’ lead 12-10 until Tyler Payne pushed its back up to 13-10.

The Wolfpack scored the next three goals to draw even with the Mustangs at 13-13 at the 2:16 mark. In addition to tying the game, they were also a man up after the goal, as the Mustangs were called for a slashing call, but managed to kill the penalty, get the ball and call time out.

The Mustangs had a good look at goal, but Ryan Richters was there to save it, allowing the Wolfpack to get the ball and call time out of their own. The Wolfpack got it up the field and avoided losing the ball, finding Nathan Hoover, who buried the go-ahead goal to give the Wolfpack their first lead of the game at 14-13.

With 13 seconds left, the Mustangs won the draw and went a man up with seconds left, forcing Great Oak coach Mike Bowers to call time out and set up something on defense. The Mustangs got two shots off with the first sailing high, and with two seconds left, the second shot was saved by Richters ending the game and allowing the Wolfpack to storm the field.

Taylor Chase and Sean Haas led the Wolfpack with four goals apiece while Sean Sanchez added a hat trick of his own. In addition to Hoover’s game winner, Cole Condon and Jason Thibeault added a goal apiece for Great Oak, which got 14 saves from Richters.

Both teams now prepare for the playoffs which start on Tuesday. Seedings will be announced later on today.