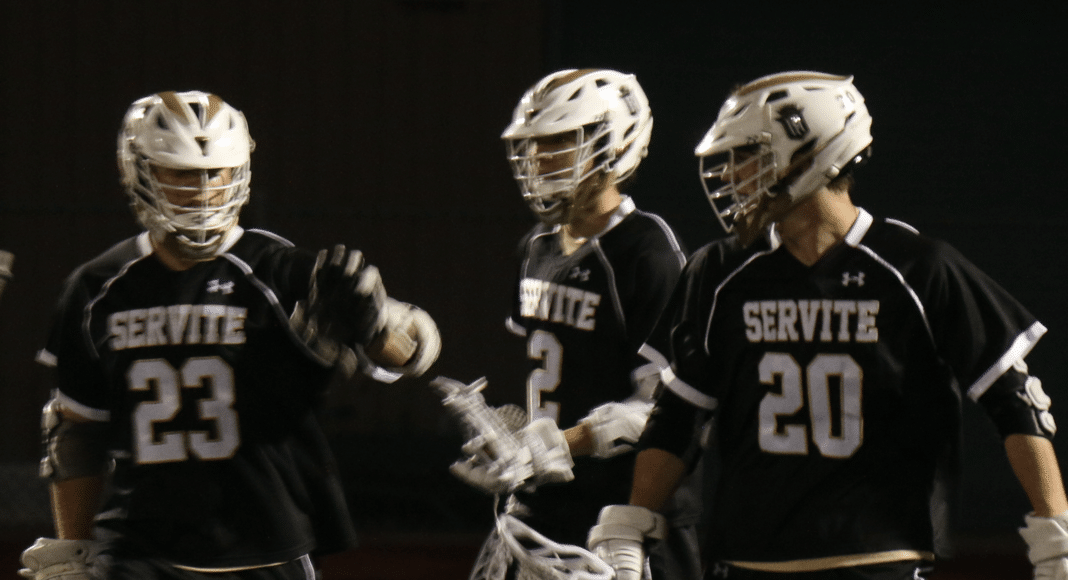 Zach Williams scored five goals on Thursday night to lead the Servite boys’ lacrosse team to a hard-fought 14-11 over Santiago.  The victory continues the momentum that Servite started with its buzzer-beating win over Brighton, Utah on Saturday. Meanwhile Santiago continues to show that it is a legitimate threat.

Thursday’s game featured a tick-for-tack battle with both teams trading goals all the way down to the wire. There were four total lead changes in the game but it was Servite that did a better job of capitalizing off mistakes, especially in crunch time.

The Friars had jumped out to a 2-0 lead in the first quarter and was looking to put the game away early. However, the Sharks responded with a 3-0 run of their own to take their first lead of the game.

Unfortunately for Santiago, Williams got himself going with his first goal to even the score at 3-3. The senior was a terror for the Sharks’ defense all night long and his high activity was ultimately the deciding factor in the Friars’ eventual win.

Though the Sharks had a 7-6 lead at halftime, they gradually let the game slip away in the second half. After heading into the fourth quarter with a 10-9 lead, Santiago went silent for nearly 10 minutes and committed turnovers that allowed Servite to take a 13-10 with 5:15 left on the clock.

The Sharks did sneak in their last goal to pull within two, but the game was sealed when Williams nailed the dagger late in the quarter for his fifth goal of the night. Friars Jack Terrones and Cole Brennan also put together notable performances as they each recorded a hat-trick and three assists to help put Servite on top.

For the Sharks, Ruben Santana (2g, 4a,), Ryan Richardson (3g), John Plys (2g) and Ben Hamilton (2g) carried the load offensively and kept the Friars’ defense on its toes. The play of night happened when Plys fought for a ground ball and then flicked a no-look pass over his head to Santana who fed it inside to Richardson for the goal.

This was much-needed win for Servite as it now draws the team within one game from leveling its record at 5-5. On the other hand, Santiago is still sitting relatively pretty at 5-4 but has a challenging road game coming up against Great Oak.