California Veteran Will Patton goes all in for 2016, recruits 11 teams to play August 6-7! 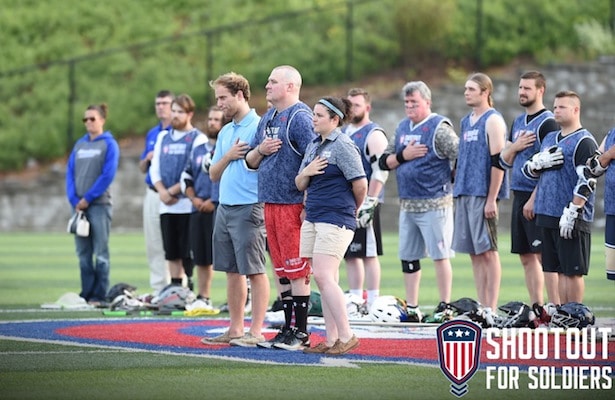 Will Patton, 43, got involved with the Shootout for Soldiers California last year mostly because of his kids’ love for lacrosse and the causes the event supports. A conversation on the sidelines with executive director Tyler Steinhardt, however, not only convinced him not only to up his involvement in 2016, but also to get in the game.

“So, last year I pulled together about seven teams,” Patton said. “This year I’ve got eleven teams coming.”

That’s an incredible number from someone who as of last year was never involved in the game himself. Why the incredible dedication?

“I served 5 years in the Army,” Patton said.  He was active from 1991-1996 and stationed in Ft. Bragg, NC before being transferred to Germany.  “I was involved during conflict but I didn’t get sent into any conflict. And I constantly see these stories of these Veterans coming back without getting help and what you guys did just fueled me to get involved and give back to the Veterans. Because I’m a lucky one.” A moment during last year’s California event had quite the effect on the energy Patton put into recruiting eleven teams for 2016.

“The way that I got eleven teams is because last year on the sidelines I had Tyler asked me three different times why I wasn’t on the field playing,” Patton recounted.  “That fueled me to start coaching lacrosse and start playing lacrosse so that this year I could actually participate in Shootout for Soldiers.”

He has relied on relationships formed with those in his lacrosse community to garner a ton of local support for California’s second Shootout for Soldiers. “I’ve got ties to every team one way or another, whether I’m coaching them, playing for them, or have worked for them in the past four years in lacrosse.”

Look for Patton on the field this go around at Dana Hills High School, as he is playing in perhaps two of the most popular SFS games on August 6th and 7th—the Veterans game and the father-son game.

“I’m most excited to stand on the sidelines with my fellow Veterans,” Patton said.