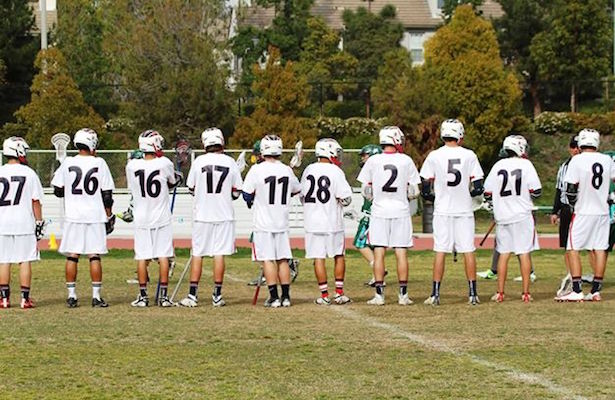 For many fans of the sport in Southern California, this weekend’s Pac-12 Shootout at UCLA signals the kick-off to the MCLA season. But for two brothers from Orange County, it’s more of a family reunion.

Jack White and Nick White, who graduated from Beckman High School in 2014, first developed a passion for the sport of lacrosse in the fourth grade. They would go on to become standout athletes at Beckman with Nick breaking records as a receiver for the school’s football team and contributing as a two-way All-League midfielder on the lacrosse team, and Jack garnering Defensive Player of the Year honors as a defenseman in lacrosse while playing nose guard for the football team.After high school, the fraternal twins went their separate ways geographically but remain bonded by their lacrosse. Each chose to play MCLA lacrosse for a Pac-12 team, and this weekend’s tournament gives them the opportunity to pose for pictures in opposing uniforms for the first time.

Jack took a liking to the University of Arizona, and committed to play lacrosse for the Laxcats. Under second-year coach Derek Pedrick, the team is pushing championship aspirations forward in a crowded state that also features top-ranked teams such as league rivals Arizona State and Grand Canyon University. Nick, on the other hand, was recruited to Cal Berkeley for his football skills. As it turns out, though, his lacrosse career wasn’t finished yet. As soon as football commitments were through for the year, he joined the Cal lax team, headed up by first-year head coach Ned Webster.

Despite being twins, there’s a lot of differences between the two. Nick boasts height and athletic finesse at 6-foot-2, which allows him to serve as a threat both offensively and defensively. Jack, on the other hand, stands 5-foot-10 but has built a reputation as a stout, tough-nosed defender with versatile abilities throughout his career as a long-pole.

Perhaps the most special quality about these two is their determination and dedication to the growth of the sport. When faced with the decision of where to go to high school, it seemed like a no-brainer at the time. On one hand, there’s Foothill, the most prominent lacrosse powerhouse in all of Orange County.

Instead, the boys went to Arnold O. Beckman High School. It was a school that didn’t tout great athletics, and it definitely didn’t jump off the page as a lacrosse hotbed. But the White brothers saw a challenge and embraced it, becoming a part of the push that raised the bar of Beckman athletics both on the football field and in lacrosse.

At first, playing at Beckman had only downside. The team suffered brutal, blowout defeats at the hands of fellow Pacific Coast League teams, week after week. This would go on through the brothers’ freshman and sophomore years at Beckman. Then things changed.

In the spring of 2013, the Whites led the charge for a Beckman team that won the PCL and ended up in the postseason. The team was bounced in the second round of the playoffs, but it was a positive turn for the better based on results in years past.

Then, Beckman lacrosse became a story around Orange County. The team put together a 15-game win streak in 2014, the boys’ senior season, and worked the Patriots into the conversation as a contender. They would at one point be ranked No. 6 in all of the county, and although the season ended in heartbreak fashion with a first round upset loss in the playoffs, the mission was complete: Beckman had risen from a struggling program to a powerhouse, in large part due to the efforts of two twin brothers.
Although they’ve gone off to separate colleges in different states, the two have stayed in touch throughout their freshman year. It will be more than just another trip with their respective teams this year at the Pac-12 Shootout: it will be homecoming, and a chance to showcase their college lacrosse skills to the same community that watched them build up their skills in high school.

Now as a family that supports both the Laxcats and the Golden Bears, the Whites will be having something of a reunion at the annual event, which starts up today at the UCLA campus. Fortunately for parents Chris and Stephanie White, there are no UA-Cal games on the slate, so they won’t need to worry about being a house divided.