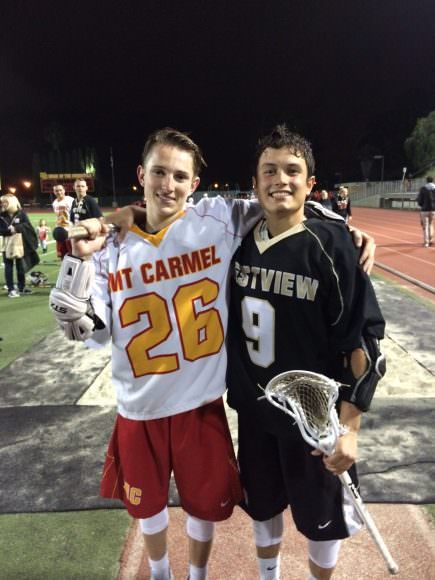 The visiting Westview Wolverines took care of business in their first road game of the year last night against the host Sundevils of Mount Carmel with a final score of 15-3 on Rancho Penasquitos (“PQ”) Tigers night.An all around solid defense and seven different goal scorers contributed to the team effort, but the “X” factor was FOGO Sophomore Nathan Wagner who consistently established possession for the Wolverines throughout the game, greatly limiting the Sundevils ability to establish its offense. Upcoming games for both teams include Friday night matchups as the Wolverines play host to the Dawson School Mustangs from Denver, and the Sundevils host a Palomar Conference game against the Del Norte Nighthawks.

Each year PQ Tigers night is held at either Westview or Mount Carmel High school where the youth players are recognized and announced at halftime. They get to watch their older brothers, friends and former PQ Tigers battle it out at the next level. The game is always a bittersweet event since the vast majority of its players all grew up playing as a team together as part of the PQ Tigers organization and are now pitted against one another. Pictured above is junior attackmen Evan Clement (MC) and Cole Zarola (WV) posing for a post-game pic.