Westlake Rides Big Second Half to Win Over Costa 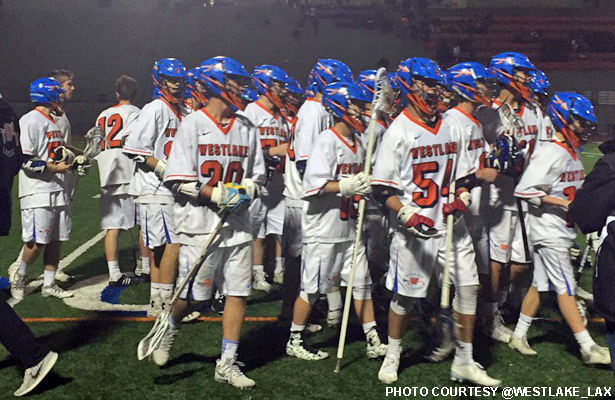 No. 4 Westlake broke open a close game with six unanswered goals from five different players to open the third period and ran away with a 14-7 first-round playoff victory over No. 13 Mira Costa.

The win earns the Warriors (13-4) a home game in Thursday’s second round against No. 12 Peninsula, which upset No. 5 Agoura 8-7 in overtime Tuesday.

For the first half on Tuesday, though, it appeared Westlake might become an upset victim. The Mustangs led 2-0 early, 5-1 early in the second period and 6-3 at halftime. Midfielder Casey Bonner scored three of those goals and assisted on another for Costa, and goalie John Van Sickle recorded seven first-half saves.

But something changed for the Warriors at halftime, and the floodgates opened. Duke Cohen, Jacob Mannisto and Joe Brandolino scored unassisted in the first 2:17 of the period, pulling Westlake even at 6-6. Goals from Spencer Tyoran, assisted by Cohen, Philip Bliss and Brandolino again made it 9-6 just five minutes into the third period.

Westlake led 10-7 heading into the fourth quarter but wasn’t finished, scoring four consecutive goals — a couple of them with a man-advantage — to pull away.

Senior Brett Reilly, who scored twice in the first period and twice in the fourth, led the Warriors with four goals. Cohen (3g, 2a), Brandolino (3g), Tyoran (1g, 1a) and Mannisto (1g, 1a) also had multiple points. Bliss and Grant Barclay scored one goal each.

Bonner finished with four goals and an assist to lead Mira Costa; Ryan Gustafson had two goals, and Zane Crandall had a goal and an assist.