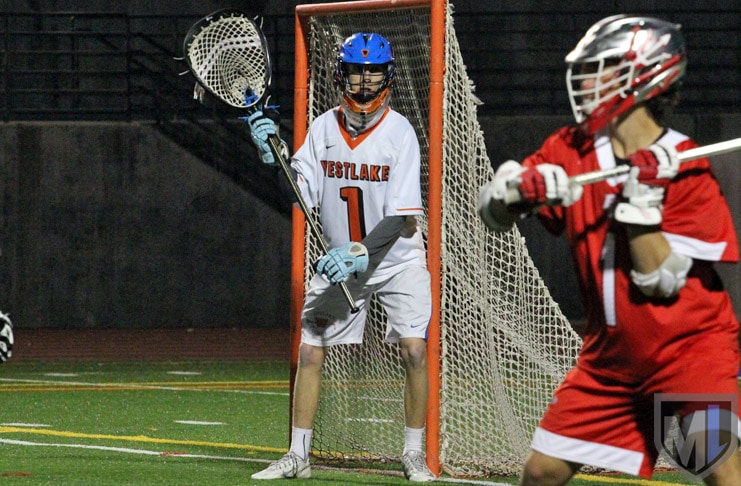 After a sudden and unexpected turn of events in recent weeks, Westlake senior goalie Matt Kilkeary has committed to attend and play NCAA Division I lacrosse at the University of Delaware.

Kilkeary, a four-year varsity starter and three-time All-Marmonte League selection, said he was all set to take a post-graduate year after two summers with the Long Island Sting on the recruiting circuit had not generated the kind of college offers he was hoping for.

Then, in the words of Sting coach Ken Miller, Kilkeary “pulled a rabbit out of his hat.”

Miller said he received a text message from Delaware coach Bob Shillinglaw asking if Miller knew of any 2017 goalies who were uncommitted. Miller quickly emailed Kilkeary’s highlight video link, then called Matt and his parents. Within the hour, Shillinglaw said Delaware had a spot for Kilkeary, sending the family into what Miller described as “fire drill mode, getting his transcripts together and getting the application done.”

Once the admissions office had reviewed the paperwork, Miller said, Shillinglaw told Kilkeary he had been accepted and they had a spot on the team waiting for him.

Over the last two seasons at Westlake, Kilkeary has posted a .562 save percentage and a 4.64 goals-against average. Last year, he helped the Warriors reach the US Lacrosse North semifinals, where they lost to Palos Verdes 11-2 despite Kilkeary’s 22 saves. He made 20 saves in a nonleague loss to Palos Verdes this season, one of eight games with double-digit saves.