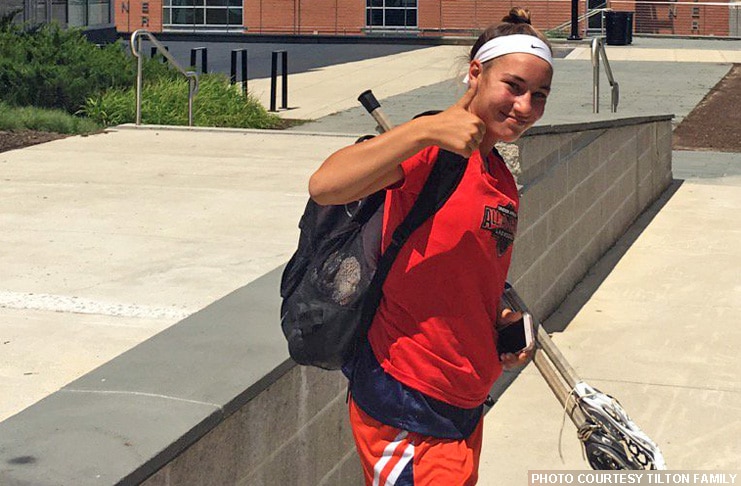 Shelby Tilton, a freshman at Westlake HS who will begin her first high school season next month, has committed to play NCAA Division I lacrosse at USC.

Though she has yet to don a high school uniform, she has a long list of lacrosse accomplishments. Tilton has been playing lacrosse since fourth grade, and when her family moved from near Philadelphia to Westlake Village before middle school, she began attending camps and other programs at USC.

“They got to see me play and grow over the years,” Tilton said. “I really liked it there,” adding that the USC coaches stayed in touch and were able to see her play in various club tournaments, as well.

Locally, Tilton has played a few tournaments with 3d San Diego, and this weekend she’ll play for the Rugged Royals club at Sand Storm.

Last spring she made the Southwest Command roster (players in the 2019 and 2020 classes) for the Under Armour Underclass tournament in Baltimore. She scored six goals and had an assist in six games.

But her biggest strides have come while playing for Ultimate Lacrosse out of the Philadelphia area. Jenny Duckenfield, who coached Tilton with Ultimate’s 2020 Blue squad last summer, raved about both her ability and her potential.

“She’s a tremendous player,” Duckenfield said. “She’s one of the most-watched players in that 2020 class. She has tremendous skill and is really setting the bar for other players, especially in California. She’s that good.”

Tilton and Duckenfield both said there were a number of schools recruiting her, but Tilton said the lure of USC was too much to pass up.

“I was talking with Dartmouth, Arizona and Northwestern,” she said. “I visited other schools and got a feel for big and small and different climates. I’m comfortable with USC. The coaches are incredible.”

While it will some time before Tilton joins the USC program, Duckenfield is convinced she’ll fit right in.

“When I first saw her at the tryout — she tried out just like everyone else — I was like, ‘Who is this?’ ” Duckenfield said. “I’m pretty familiar with everyone in Philadelphia, so who is this and how come I don’t know her? My first question was, ‘What’s your name?’ The skill set she has was not that of an eighth grader.

“Shelby has the edge, mentally. Her skill set is obviously there, but she’s a great teammate and great competitor, and she’s very coachable. It’s very rare to meet a player with all of that who also is genuinely nice.”