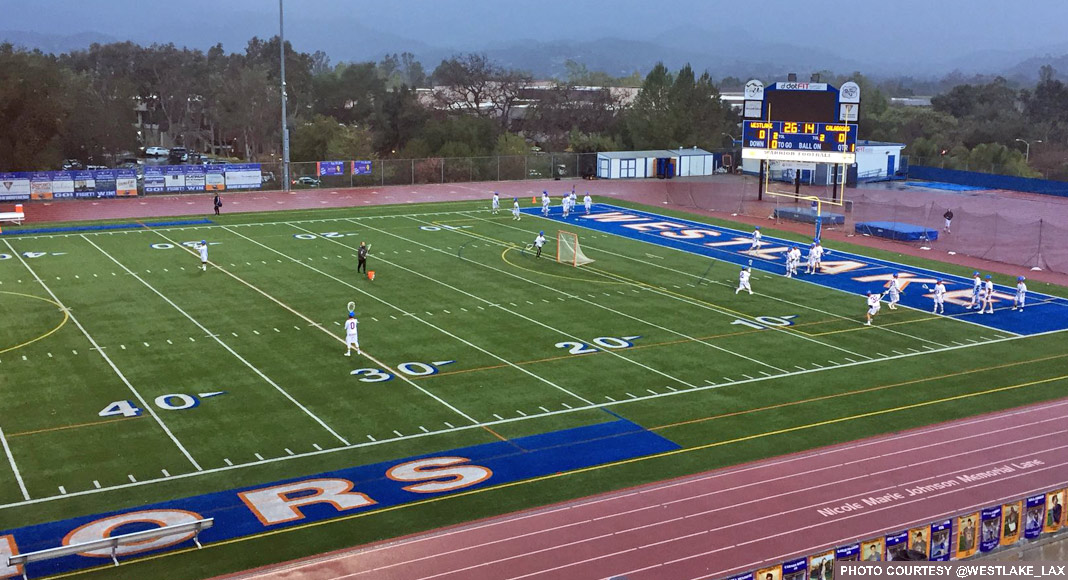 Since coming in at No. 8 in the US Lacrosse/MaxLaxLA preseason coaches poll, the Westlake Warriors have won their first six games by an average score of 19-6 and climbed first to No. 6 and now to No. 4 in the Week 3 coaches poll.

Westlake, which received three first-place votes, moved ahead of both Chaminade and Oaks Christian, who now sit at Nos. 5 and 6, respectively. Mira Costa moved up one to No. 9, pushing Newbury Park back to No. 10.

Sierra Canyon and Palisades also each moved up a spot, bumping winless Thousand Oaks back from No. 12 to No. 14.

Voters still seem to be giving the Lancers plenty of credit for their schedule strength — five of their seven losses have come against teams in the Top 7 of the coaches poll, and they face the other two this week — Palos Verdes today and Agoura on Wednesday. Moreover, the Lancers’ other two losses came against Top 10 Orange County teams Foothill and San Clemente.

St. John Bosco remains No. 15, despite losses to No. 9 Mira Costa and No. 11 Crespi, but West Ranch dropped two spots after losses to No. 12 Sierra Canyon and No. 13 Palisades and now sits at No. 18, behind San Marcos and Santa Monica, which each moved up a spot.

St. Francis won twice on a weekend trip to San Diego and moved up one spot to No. 19, and Redondo Union finally was rewarded for its 5-1 start by moving into the rankings at No. 20. That bumped out Bay League rival Peninsula.

Through all of the minor movement in the bottom half of the rankings, though, it’s Westlake’s climb that is most notable.

The Warriors have wins over No. 8 Oak Park, No. 9 Mira Costa and No. 11 Crespi, along with a win over No. 14 Thousand Oaks. They face No. 7 Agoura on Friday, then take nearly two weeks off before returning April 5 to play at OC power Foothill. Later in April, the Warriors face Palos Verdes, and they still have the bulk of the Marmonte League slate ahead of them, including two games with Oaks Christian and one more with Agoura.

But the Warriors’ rise might be more how they’re winning than about who they’re beating. Westlake is averaging 19 goals per game behind three players who have scored 20-plus goals in six games — seniors Duke Cohen and Seamus O’Brien with 25 and junior Nick Reilly with 20. With sophomore face-off middie Jacob Martin winning 85 percent of his draws, the Warriors wind up with plenty of opportunities to score.

Until they run into a defense that can slow down that offensive pace, the Warriors might keep climbing.

Below are the results of the US Lacrosse/MaxLaxLA boys LA coaches poll after Week 3 of the regular season, with 30 ballots submitted.