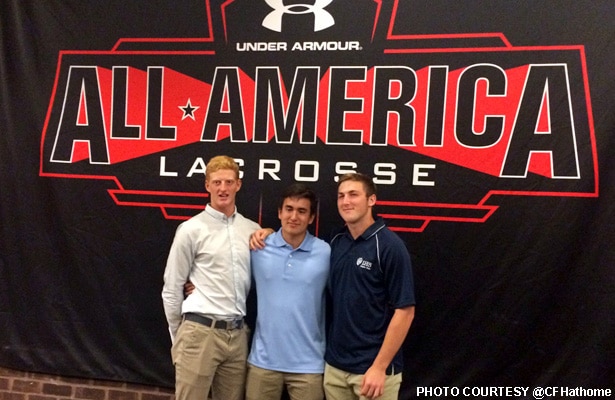 The West plays once more Saturday against New England before moving on to bracket play Sunday.

Very limited statistics are available from the tournament games via Tourney Machine (goals, assists, saves), but the summary does show Loyola goalie Theuer, splitting time in goal, making three saves in a 16-10 win over Upstate NY and five saves the 12-7 win over the South team.

UPDATE:
The West team beat New England 9-8 to finish pool play unbeaten at 4-0 and will begin bracket play Sunday as the likely No. 1 or No. 2 seed. Only the Philadelphia team also went 4-0 in pool play.

Theuer, defenseman Mohler and face-off middie Hesse are the only Los Angeles-area players on the West team in the Highlight Division — for players in the 2017 and 2018 graduating classes.

LSM Brennan Greenwald and defenseman Jordan Pakzad of Corona del Mar and attack Ellis Geis of Foothill are representing Orange County. Geis had a goal and an assist in the win over South.

The West team in the Command Division, for players in the 2019 and 2020 graduating classes, has gone 2-1 in its first three pool games, losing to Baltimore 7-5 and beating Upstate New York 11-6 on Friday, then posting a 7-5 win over the South on Saturday morning.

Midfielder Maxim Manyak of Oak Park scored twice in the win over Upstate NY and three times in Saturday’s win over South.

Loyola’s Speed Fry and Kaiser Fry are also on the West roster, along with Asher Early of Harvard Westlake.

The West has one more pool game Saturday before moving on to bracket play Sunday.

UPDATE:
The West lost 9-7 to New England to finish pool play 2-2. Asher Early was the only LA player to find the net for West, which continues play Sunday in the elimination bracket.