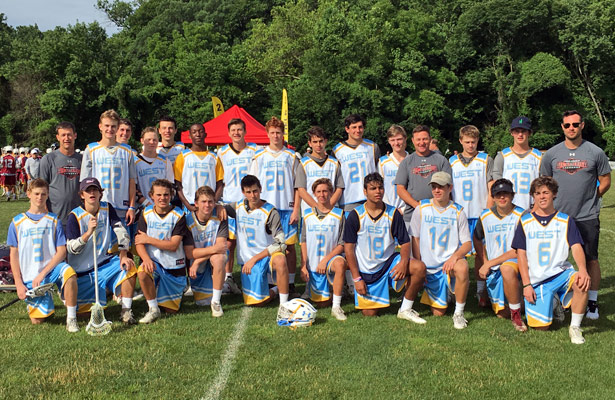 Both West Regional squads, each featuring a number of Southern California players, were eliminated early Sunday with bracket-round losses at the Under Armour Underclass Tournament in Baltimore.
The Highlight Division team of players in the 2017 and 2018 graduating classes, lost 11-9 to Washington D.C. after earning the No. 2 seed with a 4-0 record in pool play Friday and Saturday. But the D.C. squad jumped out to a 5-0 lead early in Sunday’s bracket game, and the West was unable to fully close the gap. Goalie Joe Theuer (Loyola ’17) was credited with four saves.

The West ‘D’ has been bringing it this weekend to help the Highlight team go 4-0 in pool play. #UAALLAMERICA pic.twitter.com/SO9071AoOp

The Command Division team (pictured above) of players in the 2019 and 2020 classes, was shut out 8-0 by Philadelphia on Sunday. The West had gone 2-2 in pool play.

Rosters for both squads — and all other UA Underclass regional teams — are available here.