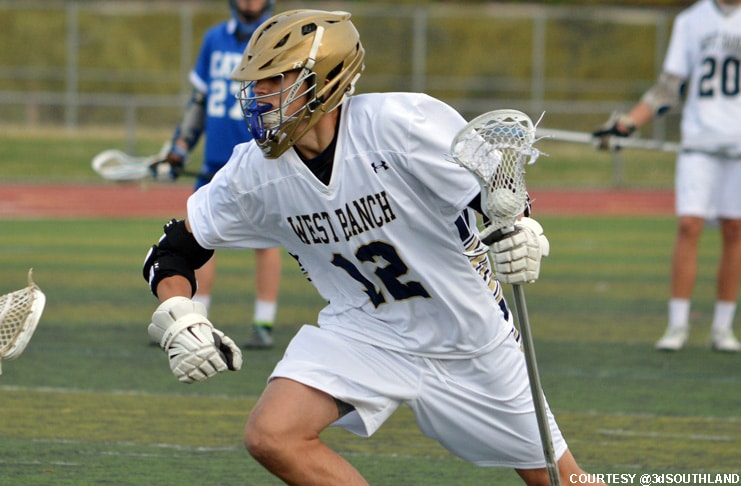 The 6-foot-3 Domic scored 89 points for the Wildcats last Spring on 37 goals and 52 assists. He also collected 120 ground balls 17 games.

“Teo is a strong player whose lacrosse IQ is extremely high,” West Ranch coach Mike Borsos said. “He’s like having another coach on the field. He has another gear above other players, and when he kicks it in, he’s almost unstoppable.”

That extra gear and his work on ground balls caught the eye of the St. Joseph’s coaches at the team’s prospect camp over the summer.

Domic, who credits 3d LA/Southland and coach Adam Sear for helping him through the recruiting process, said he had never met or even had contact with the Hawks’ coaches, despite attending numerous recruiting events. But after earning all-star recognition at the FLG in 3d tournament in Maryland while playing for 3d SoCal, Domic said he made a last-minute decision to attend the Hawks’ prospect camp.

It paid off, as Domic said he was able to impress the Hawks’ coaching staff with his speed, athleticism and ground-ball play.

“They said they want me to play D-middie in my first few years,” Domic said by phone Thursday. “I played really well on defense and ground balls and was the fastest guy at the prospect camp.”

The Hawks have won the Northeast Conference regular-season title three years in a row, competing against the likes of Bryant and Hobart. Last Spring, St. Joseph’s went 12-4, averaging 12.3 goals per game while surrendering 7.8.

Domic said the Hawks’ coaches see him contributing to that defense and using his speed to create transition opportunities.

“That’s the one thing they focused on,” Domic said. “They already know what I’m good at with my athleticism and speed; they just want to teach me to shoot better in transition.”