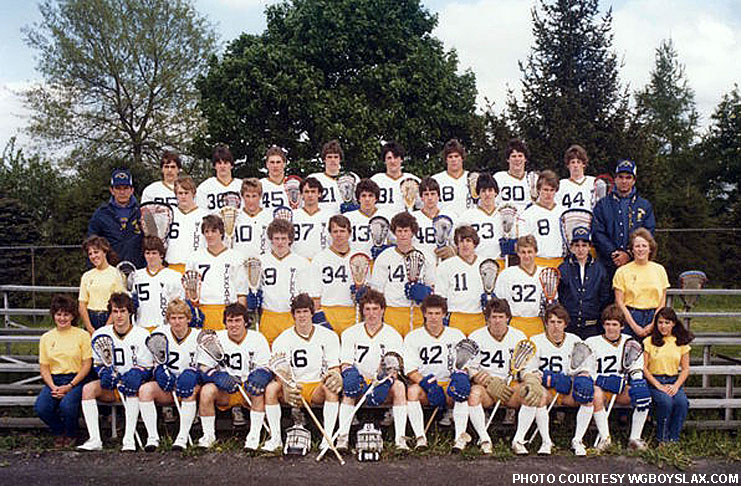 It was 1984, and Syracuse freshman and starting midfielder (now Hall of Famer) Todd Curry sat alone in front of his locker after the first loss of the season. Assistant coach Kevin Donahue noticed that Curry looked confused.

“After about 20 minutes, we decided to speak to him,” head coach John Desko said in a phone interview this week. “He said he was contemplating the loss, and we told him it was a long season; we’d get the next one.”

Curry looked up and told his coaches it was his first loss at any level of lacrosse. How, you ask, did a player not lose a youth or high school game?

Most lacrosse players at most any level know and even request the West Gennie drill, as it is the most popular and influential drill in the history of the game. And the transition-based drill works. From 1981-1984, under legendary coach Mike Messere, West Gennie ripped off 91 straight wins — including three New York state titles — before losing by one goal in the 1984 state title game on a controversial call.

The Wildcats then ran off 44 more consecutive wins, including the 1985 state title. West Genesee went 135-1 during that streak and 212-6 with five state championships and six title-game appearances in the 1980s.

It is considered the greatest streak the game has ever seen. No recruiting. Not a private school. Just homegrown and well coached.

West Genesee fueled the rise of Syracuse lacrosse to new heights and helped then-Division III Hobart beat No. 1 North Carolina and No. 1 Syracuse in 1983 and 1986, respectively. West Gennie used the “Central NY style” — pressure defense and precision transition passing — that brings new fans to the game in droves to this day. In addition, the Wildcats had major impacts on Cornell, Maryland and the North Carolina, to name a few others.

“I played for Bill Wormuth at Gennie, and when Coach Messere took over after I graduated, the alums of Bill’s started to help out,” Desko reflected. “The guys worked at Shove Park summers (legendary spot), and then ran lacrosse drills. It was consistency and repetition; everyone was on the same page. The summer sessions were where the program perfected stickwork. And Coach Messere had everyone run the same drills.”

As for coach Messere, who still coaches the Wildcats, LaxRecords.com has him with 811 victories and 15 state titles. He won 93 percent of his team’s games and is considered by many to be the greatest lacrosse coach of all time, any level.

In researching this article I found four things the Gennie players had in common.

Back in the day if someone said you played “like a Gennie guy,” it was the best compliment you could receive, it was the ultimate validation that you played team lacrosse. The players not from Gennie aspired to it. Gennie guys played the ultimate team game and looked the coolest doing it.

“I think today kids put the cart before the horse,” Desko said. “Going to recruiting tourneys before you have the fundaments down has become a trend. The fundamentals have suffered. We will do less recruiting events going forward. They just need to work more on fundamentals.”

One reporter summed up what most people saw in Central New York with the West Genesee program and coach Messere. Neil Kerr wrote for the Syracuse Post-Standard for 44 years and recalled a controversial ruling that may have cost the Wildcats a goal and the 91 game streak ended.

“You’d think they would have been crushed, but they stood at midfield, staying in military line, sticks held high,” Kerr said. “I’d never seen poise like that. They had too much class to throw sticks and scream or yell. He (Messere) was the best I ever worked with. He didn’t take guff from anyone. You walk the line or you were gone.”

So, young players, next time you run the West Gennie drill, D-up, move the ball and stick your shots — you too can play “like a Gennie guy!”