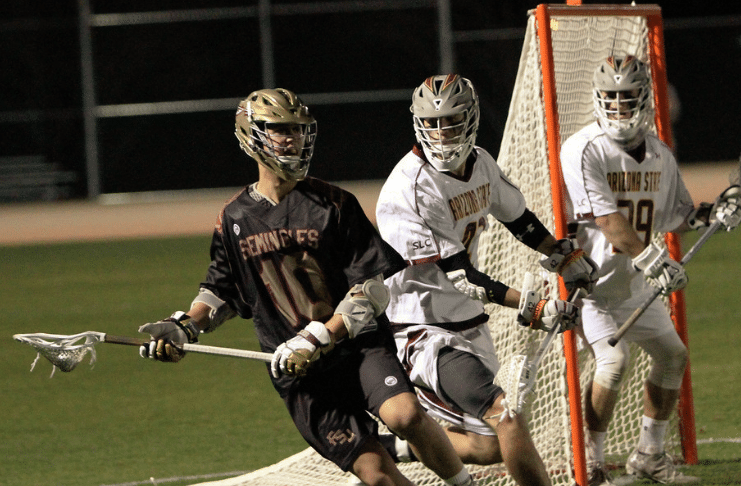 No one knew what to expect out of 15th-ranked Florida State when the Seminoles came to the state of Arizona to open their season. Then, they pulled off back-to-back wins against No. 8 Arizona State, 6-5, and No. 10 Arizona, 9-7, to prove they’re among the elite in the MCLA.

Junior attackman Davis Goodman, a local Florida product, led the Seminoles to the tune of 10 points (4g, 6a) in the two games. It was the defense that shone brightest, though, as the ‘Noles allowed only a combined 12 goals against the Sun Devils and LaxCats. Junior goalie Anthony Cicio made 31 stops on the weekend, an incredible 72.1 save percentage.

No. 1 Chapman faced a tough test right out of the gate against a San Diego State team with a lot of talent. The No. 23 Aztecs (1-1) put up a fight, trailing by only one at the half, but the Panthers (1-0) maintained the lead down the stretch for a 15-12 win.

Thursday, the Utah Utes visit Orange County for their season opener against the MCLA champs.

Santa Barbara gets a weekend split

Both of UCSB’s games this weekend were worth following. The No. 11 Gauchos played at No. 14 Cal on Saturday, and things didn’t go so well. The Golden Bears broke out with an 8-goal win, 13-5, thanks to a dominant performance at the face-off dot by two L.A.-area freshmen, Jake Pistotnik (Sierra Canyon) and Mark Galanti (Chaminade). Pistotnik won 15 of 19 draws and was credited with 14 ground balls. He also scored a goal. Galanti won all three of his face-offs.

Freshman Jake Lombardo (Aliso Niguel) had three assists for the Bears, while senior Max McKone (Novato) led Cal with five goals. The possession edge stifled the Santa Barbara offense. The five goals were the fewest the Gauchos have scored in their last 10 meetings with Cal.

Things went better for the Gauchos on Sunday, as they took down No. 18 Stanford. After a rough first quarter, in which it fell behind 4-1, UCSB held the Cardinal to only two goals the rest of the way for an 8-6 win. Santa Barbara’s next matchup comes in a rivalry battle at second-ranked Cal Poly on Saturday.

• Defenseman Austin Johnson (Laguna Hills) had two points and seven GBs for Sonoma State as the Seawolves went 1-1 against Washington and Oregon State.

The San Diego Toreros (2-0) had no problem dismantling Cal State San Marcos 18-7 in the start of SLC play. The Toreros took a 5-0 lead after one quarter and were up 11-2 at halftime.