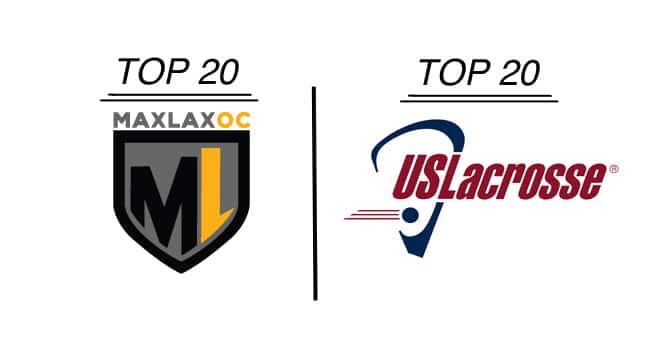 The first full week of play created some motion in both the US Lacrosse Coaches’ Poll and the MaxLaxOC.com Top 20. In the Coaches’ Poll, the gap between last week’s top two teams disappeared as CdM moved into a tie for first place with St. Margaret’s although neither team has played a game yet. Foothill, JSerra, and San Clemente held fast at the 3 through 5 spots. Beckman was impressive enough in their loss to JSerra to move up a spot from 7 to 6. Further down the ladder, the 3-0 Trabuco Hills Mustangs made their debut at the no. 20 slot.

The MaxLaxOC.com panel see things a little differently. Foothill’s 3-0 start moved them past CdM into the number two spot and Servite makes an appearance at no. 16