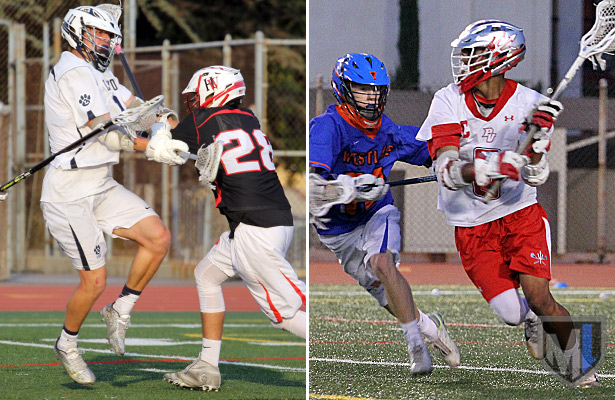 Palos Verdes has reached the US Lacrosse LA championship game for the seventh year in a row and fourth time for the Class of 2016 seniors. Wednesday, the No. 1 Sea Kings (19-2) will try to win their third LA title in the last four seasons and fourth overall when they face No. 2-seeded Loyola (18-4) at Mira Costa HS (7 p.m.). Admission to the game is $5, and it will be preceded by the girls LA title game between No. 1 Oak Park and No. 3 Redondo Union.

This is the championship matchup many predicted as far back as last season. In fact, it was the matchup many expected to see last season, but the Cubs stumbled, losing in the second round of the playoffs. They very nearly stumbled again in Saturday’s semifinals, trailing Harvard Westlake 8-5 in the fourth quarter before recovering for a 10-8 win.

The fourth quarter Saturday is a much better indication of the overall depth and quality of this Loyola team than were the first three. Five different players scored the team’s five fourth-quarter goals, and the goals came in all flavors — midfield dodges, X-attack dodges, outside rips and man-up cutters down the middle.

The Cubs are deep and versatile, and when they get rolling, they are hard to stop. Loyola has averaged nearly 14 goals per game this season and has scored 15 or more 11 times. Their only losses have come against Orange County power Foothill, 10-3 on March 9; 11-6 at Monte Vista (Danville), ranked No. 1 in the West in the Under Armour/Inside Lacrosse experts poll; 11-6 at San Diego power Torrey Pines, ranked No. 2 in the West experts poll; and home to Palos Verdes, 6-5 in overtime. Oh, and PV is ranked No. 8 in the West.

If that game is any indication, Wednesday night’s title game should be epic. Loyola’s zone defense held the Sea Kings in check throughout, enabling the Cubs to build a 5-2 lead in the fourth quarter. But the veteran Palos Verdes offense, operating without star middie Peter Henkhaus, didn’t panic. Instead, the Sea Kings pumped in three goals, tying the game with only seconds remaining to send it to overtime. As the clock ticked down in overtime, the Sea Kings pushed the game-winner across for their first and only lead of the game.

That was the sixth victory in what would become a 19-game winning streak for Palos Verdes, which hasn’t lost since dropping back-to-back road games to open the season, at Westlake and Orange County finalist St. Margaret’s. Among the 19 victories are wins over De La Salle (Concord), which was ranked in the West poll at the time; and OC semifinalists Santa Margarita Catholic and Foothill. Palos Verdes advance to the title game by dispatching Westlake 11-2, avenging their season-opening loss to the Warriors.

So both teams have been tested this season, but the Sea Kings also are playoff-tested. PV’s Class of 2016 has gone 14-3 in playoff games the last four seasons, including 3-0 so far this season and 2-1 in previous LA title games.

Beyond that, there are uncommitted players like attack Jack Larkin (20g, 17a); middies John Gressett 12g, 17a) and Beau Sabosky 20g, 4a); face-off middie Colin Fitt (73 percent); and defender Matt Nagy (35 ground balls, 19 caused-turnovers); among others.

The team is deep. But so are the Cubs.

Beyond that, the Cubs’ offense can turn to guys like juniors Mason O’Hanlon, Garrett Smith and Emmett Reilly and sophomores Henry Hasenberg and Wes Priestly, among others. Face-off middie Aidan Hesse, a sophomore, and senior Swiss-Army-Knife Max Neblina — he can play LSM, close defense, short-stick defense and face off — are adept at gaining possession for that offense.

The winner of Wednesday’s title game advances to Saturday’s US Lacrosse Southern Section championship game at Valencia HS in Placentia (Orange County) opposite the OC champion, either Corona del Mar (19-1) or St. Margaret’s (12-7). That game is scheduled for 1 p.m., preceded by the section girls’ title game.