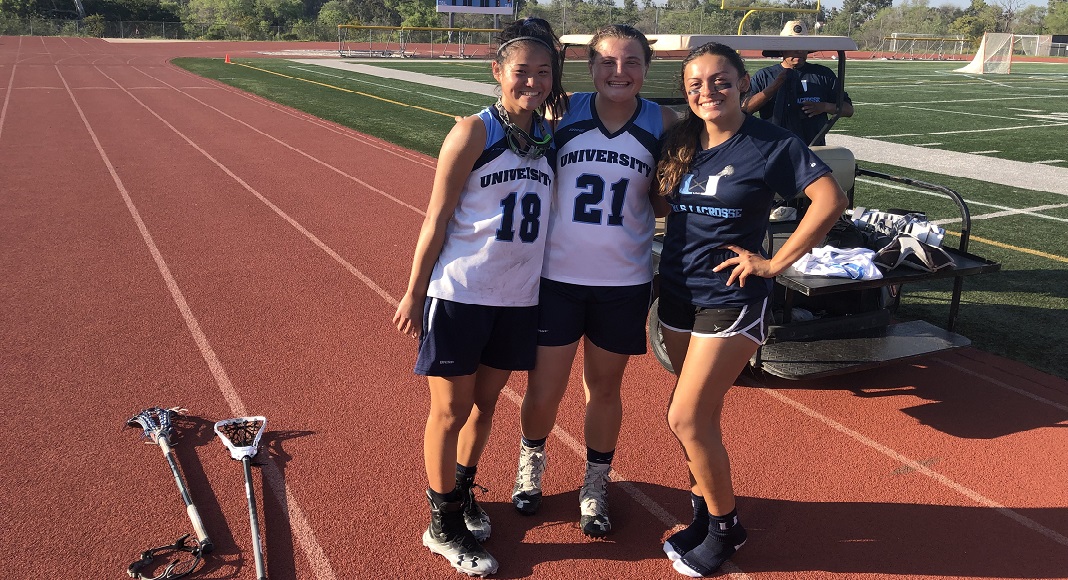 The No. 12 University girls lacrosse team needed every one of Mya Wang‘s nine goals to outlast No. 15 Santiago 16-14 on Friday at University High School.

“She [Wang] plays at a level that is unreal for high school lacrosse. She is full of surprises. I can’t give her enough credit,” Trojans coach Martin Stibolt said.

Kaylor Chott added four goals for the Trojans while Zoe Saito and Grace Calungo each had one goal apiece. Defensively, Grace Ceceros made 12 saves and was disrupting passes made by the Sharks’ offense.

“She’s smart, she’s fast, she knows the game better than anybody out there. She had a phenomenal [day],” Stibolt said of Caceros.

The upset-minded Sharks out strong and fast, scoring three goals in the first five minutes and building a 5-2 lead by the mid-point of the first half.  It was at that point that Wang started to take over and score the last three goals of the half to give University a 6-5 lead at intermission.

The second half was a half full of lead changes and runs, starting with the Sharks scoring the first two goals of the second half and leading 7-6 after two and a half minutes passed courtesy of goals from Mykie North and Kaylee Bravo. The Trojans took back the lead at 9-7 with three straight goals.

The Sharks tied it up at 9-9 only to see the Trojans take back the lead at 11-9.  Santiago struggled to get back in the lead buy could never quite catch the Trojans as the two teams continued swapping goals.

Rhyan Jette gave the Sharks their final chance when she scored with 1:05 left in regulation to put the Sharks down only 15-14. The Sharks won the ensuing draw and tried to force overtime, but turned the ball over, allowing the Trojans to run down the clock and get the win.

Stibolt credited Erin Jeon, who stayed calm, held on to the ball and withstood a triple team from the Sharks, helping the Trojans wind the clock down after the Trojans got the ball back.

“She was guarded by three or four girls at one point, she stayed calm and she moved the ball out of her stick as soon as she had the opportunity,” Stibolt said of Jeon, adding that all 11 of his players on the field deserve credit.

Riley Wilson led Santiago with four goals while Claire Knight added three goals. Rhyan and Bravo both had two goals while North, Nicole Palochik and Lexi Brown each had one goal. The Sharks got five saves from Peyton Muse and two saves from Katie Burr.

Up next for the Trojans (11-4), a big league game and their senior day against Woodbridge at home at 4 p.m. The Sharks (11-5) play Yorba Linda in their last home game of the regular season on Monday at 7 p.m.