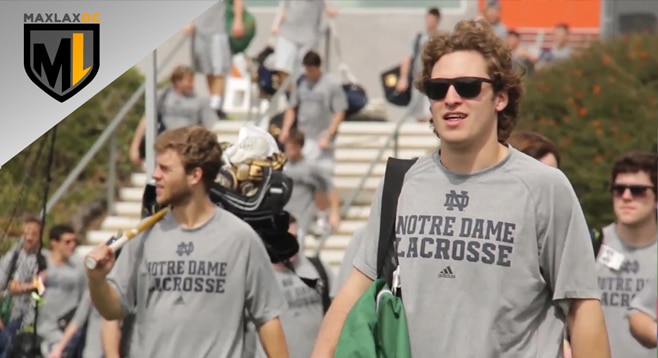 Notre Dame traveled out to face Denver at the hugely successful Pacific Coast Shootout last month where MaxLaxOC and TLN got a special opportunity to follow the championship caliber team and bring you a behind the scenes look during their trip through Orange County.

The fans started piling in early to LeBard Stadium at Orange Coast College for the potentially the biggest event in Orange County lacrosse history. Previously, the only NCAA D1 games that had been played in SoCal were a part of the “First Four” tournament held one year at the Home Depot center in 2007 then at the University of San Diego in 08-09. The Denver vs. Notre Dame game came with hope that Orange County would respond to such a high level of lacrosse and the fans did not disappoint, feeding an electric atmosphere that was the lacrosse environment of dreams.

But there was more to the Irish’s trip out to Orange County. Notre Dame knows there is more to their player development then games and workouts. Through trips like this out to California the coaches aim to create the most well rounded student athletes and members of the community through alumni dinners, youth clinics and alumni mentorship.

Notre Dame made the most out of their trip, hitting the beach, giving back at a clinic, and training with Navy Seals down in Coronado. Check out their trip in “Six Days in California”, a MaxLaxOC and TLN collaboration!