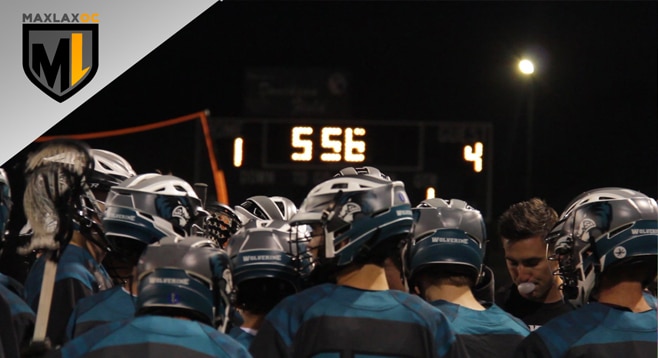 Since losing their season opener to El Toro in overtime, the Aliso Niguel Wolverines have stepped on the gas and turned it around with their third win in a row.It was easy to see that Aliso was not the same team that the MaxLaxOC staff saw when they lost to El Toro. In that game the Wolverines appeared timid and cautious on offense driving to the cage on redodge after redodge to create long possession opportunities which was not the case Tuesday night.

Both teams came out hyped for the opening whistle but it was Jonah Rinaldi that found a cutting Hayden Wollmon to put Aliso up 1-0 just 20 seconds into the first quarter of play. Senior captain Kole Escher would respond with a dirty bounce shot, taking advantage of the home floor at the natural grass (and dirt) Sailor’s stadium. That would be the last goal of the half for the Sailors who couldn’t seem to get a read on the ball coming out of goalie Eli Gutierrez stick. Seemingly good outlet after good outlet was either tipped or whiffed completely by streaking middies and defensemen alike. These failed clears would contribute to the 29 turnovers counted for the Sailors’ side. Meanwhile, Aliso went on a four-goal streak with two from captain James Murphey and one from Johan Rinaldi and Garrett Hoang as the cruised into halftime up 5-1.

Newport head coach Mark Todd must have said something to his boys at half because they came out looking like a totally different team scoring two goals (Escher and John Mooers) in the first six minutes of the third quarter to cut the Wolverine lead to two. A timeout by Aliso stymied the flash of brilliance from Newport and the game resumed looking like the first half. Sawyer Hulse settled into a solid groove shutting down Escher for the rest of the night. Murphey would put two more in for the Wolverines to bring his goal total to four on the night. Jake Lombardo (Aliso Niguel) and Alex Fuller (Newport Harbor) would net two in the final minutes of play to bring an 8-4 victory for Aliso Niguel.

1. James Murphey, Aliso: His size and cannon was too much for Newport to handle. He could have had more than four if the Wolverines needed a few more goals at the end of the game.

3. Nathan Chaness (Newport) and Michael Marino (Aliso): These guys had some battles at the faceoff X. For the first time this year there was an even pitting that had long locked in battles for possessions off the face. The dust from the Newport Harbor field added to the drama.