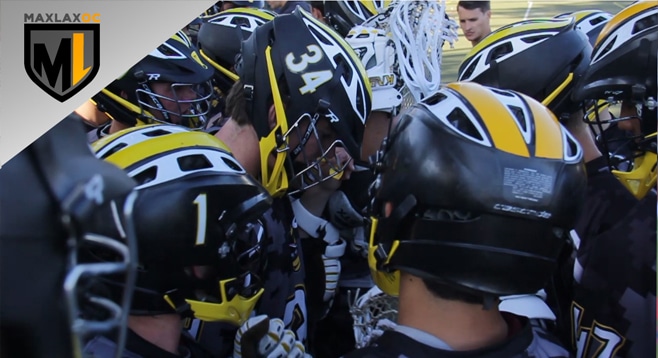 Tuesday night’s lacrosse game between No. 1 Foothill High School and No. 3 St. Margaret’s was a preview of what could be a final four matchup in this year’s playoffs. The Knights came into the game with a five game winning streak intact and fresh off a thrilling on-goal win over a JSerra squad that was ranked no. 1 in the western United States at the time. The Tartans despite their lofty ranking have been struggling of late as they learn to cope with the absence of starting goalie Payton Fales. The Tartans had lost 3 of their last five games as they got ready to compete with the Knights. With the Tartans reeling lately, the game offered Foothill the opportunity to make a statement win with the playoffs rapidly approaching. St. Margaret’s on the other hand, was anxious to show that they are still a championship contender.

Sophomore Ryan Blank turned back nine shots at goal, including one off the chest at the halftime buzzer, as Foothill High School upended tenacious host St. Margaret’s Episcopal School, 11-8, Tuesday in a showdown of Orange County powerhouses.

Attack Warren Case scored three crucial goals across two quarters as Foothill first broke a 6-6 tie with 14 seconds left in the third quarter, then passed the Tartans for good midway through the fourth quarter with goals that made it 9-8 and then 10-8 with 4:37 left.

The Knights, 11-1, also got two goals from attack Nate Marano (Denver), including a steal at midfield and a breakaway shot to tie the game at 5-5 with 10:29 left in the third quarter. The Knights never trailed again.

The Tartan defensmen turned goalie Fernando Delgado looked as good as any goalie in the county, making save after save that kept the Tartans in the game until the final minutes of the fourth quarter.

St. Margaret’s, 7-4, controlled the faceoff area with one of the nation’s best, Ryan Harnisch, who also had a goal. Sam Harnisch, Josh Davis and Hunter Edington had two goals each. Nick Shanks added one to the Tartan’s tally.