Victory Select U13 Hustles to 2nd Place in Oceanside 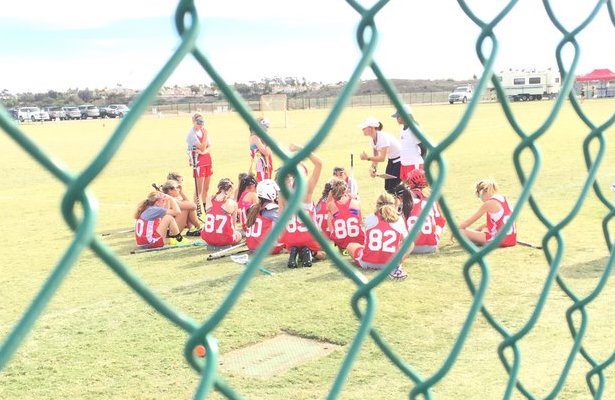 Sparked by a thrilling braveheart goal by Mya Wang in the semi-finals, the Victory Select Girls U13 team earned a second place finish at the Oceanside Hustle.

On Saturday after their first game loss to Chaos (TX) 9-5, the young ladies in crimson trooped on to defeat Mad Dog (SD) 8-3.

Victory head co-coach Michelle Mendoza remembers spotting 3D Coach Julie Liebig in the next game: “This was the new SoCal 3d gal.  3D has always been fierce competition in every tournament I’ve coached.  I hoped for us to gauge our progress and make a statement.”

In this OC versus SD showdown, U13 defeated Liebig’s 3D San Diego 21/22/23 team in a proud victory 8-6.  The momentum from two wins in a row ended their first day of Oceanside Hustle with a fire just beginning to spark.

“The message coach Holly [Reilly] and I gave the girls at the end of the day is better recorded in the journal notes they made, but I remember telling them to continue building on everything they learned from the first day’s games.  I reminded them of tournament-style wins and losses– where winning got us higher into better competition and losing sends us home.  Granted, I didn’t know there could be consolation games, but this just paints the mentality we went in with the next day,” says Mendoza.

Shaking out leg lactic acid, eating well, and drinking water was the homework for Victory U13 on Saturday.  The tweens also stayed interconnected through the night.  So, news spread fast when impact midfielders Riley Martin and Lily Matteson came down with fevers, unable to play on Sunday.

Makena Coury remembers telling the team to fill their absence.  “When you step up and play on another level, not only are you helping yourself, but you are helping your team,” she said.

The game ahead of U13 was against TreeLax 21/22.  The NorCal team was 2nd seed and undefeated in the Hustle tournament, having beat 3D San Diego 11-9, 3D Oregon 10-9, and Mad Dog 8-3. Also donning red jerseys, TreeLax seemed a mirror team to Victory Select.

The game that followed was a back-and-forth brawl.  Both Victory and TreeLax would not let up, especially apparent when #29 for Treelax was injured first playing attack in the first half, and then again dodging to goal in the second.  The game ended with a tie 7-7 due to huge saves by goalie Brookelynn Hodgin, who frustrated TreeLax’s attempt to break ahead.

Lauren Lam scored the tying goal after several free position shots were disrupted by continued fouls.  “At first, I wasn’t sure if I made the goal on time,” she says, “Then, as I heard the ref’s whistle and saw two arms go up, I was jumping and screaming with everyone!  We really played hard as a team.  I felt really happy that I was able to contribute.

Next, Victory and TreeLax played a sudden death round.  Neither team scored, although possession went both ways.  It was time for a “braveheart” tie-breaker, where a goalie and field player from each team would play a draw then fight till one team scored.

Victory player Lucy Hughitt says she was “so nervous she couldn’t watch.”  But she did.  She saw Mya Wang win possession off a ground ball foul committed by TreeLax’s leading scorer, run on fumes full-speed down the right alley, shoot, and place the game-winning shot stick-side low into nothing but net.

Huge braveheart #Victory for U13 with a 7-8 win vs @TreeLaxClub. @VictoryLax is now 3-1 and goin to the SHIP #laxchella #oceanside hustle

“The entire game was awesome but the braveheart was the best,” says Hughitt’s father, James.

After fresh and uplifting victory, the U13 team gifted TreeLax #29 an MVP ball, and set up to head to their division championship game. The winner between the other semifinalists, 3D Oregon and Chaos, would be their opponent.

Rounding a quarter of the way into the game, Victory found themselves combatting height, stick skill, and tenacity of the undefeated Texan team.  Despite a proud fight, Victory lost to Chaos 8-2, with the last goal scored on a game-finishing eight-meter shot by Hughitt.

Coach Reilly had this to say, “The U13 Victory Select Lacrosse Team is an enthusiastic and energetic group of girls who are passionate about lacrosse.  The team’s love for one another was evident throughout the weekend as the girls fought hard in the semi-final and championship game.  While we didn’t head home as the champions, we left Oceanside as a stronger and more experienced team.  Coach Michelle and I are very excited for our next showing at the Sand Storm Lacrosse Tournament and the next opportunities for growth.”