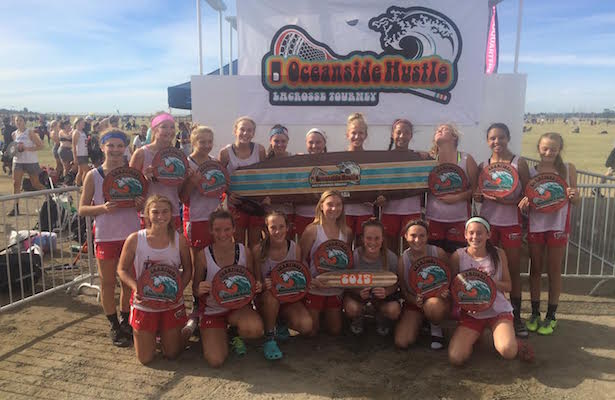 Victory Select 2020 fought through a competitive u15 bracket at the Oceanside Hustle to finish the weekend with a perfect 5-0 record and a championship.  Victory defeated teams from San Diego, Northern California, and Los Angeles to reach the championship game against 3d Oregon.  They clinched the championship by an 8-6 margin.

Afterwards, the Victory coaches stressed the importance of the team’s hard work and teamwork in the championship.  Jacky Craycraft and Kelly Baker shared “These young women work very hard to prepare for each tournament, and the improvements they have made individually and as a team were very clear this past weekend. Our defenders held their ground, with some critical caused turnovers, our midfielders hustled and were incredible on both ends of the field and our attackers worked together with great connections. In the championship game, five of the eight goals were off of assists; it just goes to show how well they’ve come together.”

Victory Lacrosse Girls Director, Holly Reilly, added, “The U15 Victory Lacrosse Oceanside Hustle Championship is a direct result of hard work, resilience, grit, and smart play.  As a coaching staff, we work relentlessly to challenge our players mentally and physically to become the best players and people they can be.  On the field, their selflessness was evident, and this was the key to our success.  The offensive transitions look more fluid, and the defensive unit is playing with more urgency.  We look forward to SandStorm Lacrosse Festival in January as the next opportunity to learn and grow together as a team.”