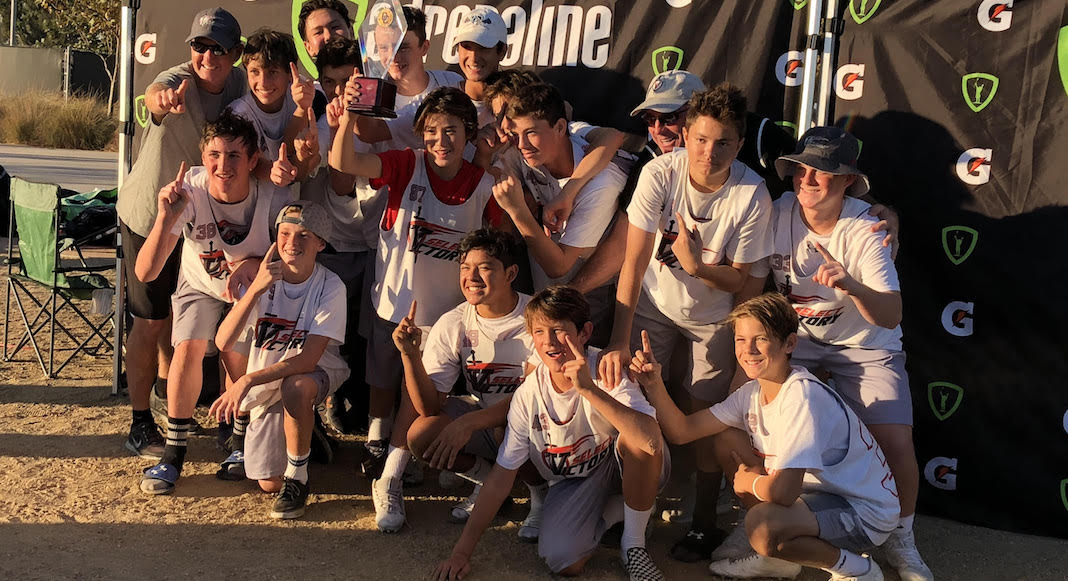 Good friends faced off on opposite sidelines for the final matchup of Adrenaline’s Fall Brawl on Nov 18-19. Both Victory Select 2022 Black and OC Crush 2022 featured several players who competed together for SoCal Express Black at Surf Storm the previous weekend, but ended up opponents in the Fall Brawl championship game. Coach Glen Miles also coached against his SoCal Express co-founder Jon Fox.

“It’s always fun to play against your friends,” said Victory goalie Sebastien Chicas. “I try to predict what the offense will do because I know a lot of the players so well.”

In the end, Victory Select came out on top with a decisive 9-0 win to take home the championship.

Victory displayed precision passing and teamwork throughout the weekend. The team racked up wins through Saturday pool play, 13-0 v. Mag Dog U-15 LA, and a 7-2 win over Mad Dog U-15 SD. Andrew Anderson showed tenacity at the face-off X to give Victory possession a majority of the time.

“I was pleased to see how our practice time translated into game time,” said Miles. “We have a lot of experienced players, but also some newer ones to the game who are picking up the concepts quickly.”

The semifinals on Sunday pitted Victory against Santa Monica Dragons 2022, which ended with an 11-2 win for Victory. In the other semifinal, Crush and Mad Dog U-15 SD ended 7-6 with a thrilling braveheart that was won by OC Crush LSM Easton Jellerson, who was appropriately dog-piled by his teammates for sending them to the championship.

In the final, both teams fist-bumped their opponents with familiarity, but between the whistles, friendships were suddenly forgotten. The game had no scoring for several minutes, when Victory finally broke the seal. Chicas appeared to erect a force field around him, blocking shot after shot. Clearly “in the zone,” Chicas frustrated the Crush offense with his quick reaction time. On the offensive end, Victory began executing their practiced plays to notch up the goals and take the win.

After the game, friends congratulated each other and hugged, as they knew they would be wearing the same uniform again very soon.