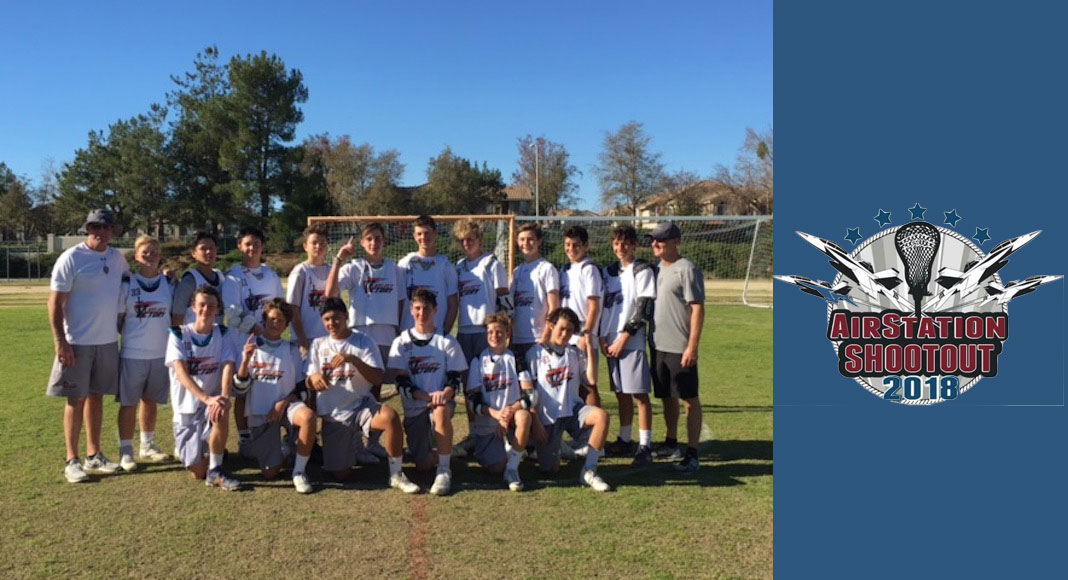 No signs of winter were visible at last weekend’s Air Station Shootout, Jan. 27-28, with the sun beating down and the mercury rising to the mid-80s over the big orange balloon at the Orange County Great Park.

For Victory Select 2022 Black, coached by Glen Miles and Tom Groeninger, the team would have to overcome lingering cases of flu and a slow start to be able to meet a formidable San Diego opponent in the championship.

The team kicked off the first game vs. Coronado 2022 with unsteady play, losing possession often on inaccurate passing and missing ground balls. Coronado, with players pooled from Mad Dog, RC and West Coast Starz, displayed confidence and athleticism in their shooting and dodging. The game ended with a 2-8 loss for Victory, and with Coronado wondering if they would get any competition in the event after having other lopsided victories earlier.

Victory would find their footing in the second game, however, with a 12-2 win over Factory. Defenders Halen Hickman-Goveia, Diego Lopez, Nate Warren, Cole Flippin, Caleb Richardson, and Riley Chester prevented Factory from being able to execute on offense.

Sunday’s forecast called for even higher temps which didn’t have the making for an easy day. Still, Victory players executed their game plan and defeated the Santa Monica Dragons and their fellow Victory 2022 Silver team. The speed of Lincoln Dodd and Marcus Lansing in the transition game would prove extremely effective. Attackman Tyler Matthews, Cole Pollard, and John Culley were on the receiving end of razor-sharp assists by Makai Todd.

Victory would defeat the Dragons a second time (7-3) in the semi-final, setting up a rematch against Coronado once again for the final.

Play got chippy early in the championship game with multiple flags thrown as a result of feisty attitudes on both sides. Victory remained composed and passed with precision and quickness, finding themselves up 5-2 at halftime. Coronado appeared a little stunned after winning so handily the previous day.

The defensive crew started cutting off the dodges, and goalie Sebastien Chicas was up to the task stopping multiple BTB attempts by Coronado shooters. Middie Radyn Badraun helped work the ball on man up and designed plays. Culley, Dodd, Matt Groeninger and Will Stahl notched goals for Victory.

“After Saturday’s loss, I wasn’t sure how we were going to respond playing Coronado again,” Miles said. “We made some adjustments, and the boys played with a ton of heart. I’m proud of how they stepped up and battled back.”

In the end, Victory came out on top with the final score 8-2, a reversal of Saturday’s score.