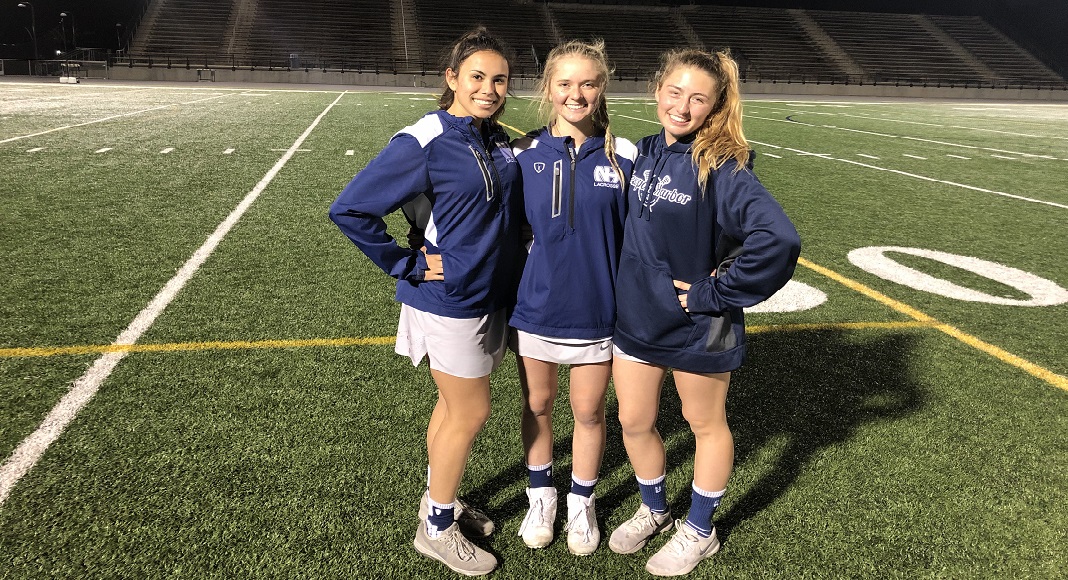 The Sailors not only earned bragging rights for the third straight year but they also made an important first step toward the first-ever Sunset League girls’ lacrosse championship.

Reese Vickers (center in the picture above) showed she has recovered from her ankle injury by leading the Sailors with nine goals . Delaney Knipp (pictured left) and Joelle Rothbard (pictured right) each had three goals. Zoey Palmquist had the Sailors’ other goal while Willa Rath made 10 saves.

“Offensively, we were strong. We protected the ball, we possessed the ball, we never gave up,” Sailors coach Brooke Martini said. “Our defense slides were there and Willa made amazing saves.”

Newport Harbor led 3-2 halfway through the first half, and then started to pull away  wafter a Vickers goal and a goal from Rothbard, assisted by Vickers gave the Sailors a 5-2 lead.

With 3:55 in the opening half, the Sailors found themselves in hot water, having picked up their fourth yellow card as a team, forcing them to be down a player the rest of the game. But the Sailors weren’t phased by being down a player, as they added two more goals, giving them a 7-2 halftime lead.

“Obviously it’s Battle of the Bay, there’s a lot of emotion, but as a team, we came out confident and that’s what helped us click on the field,” Martini said.

The Sailors opened the second half by scoring the first two goals of the second half and forcing the Sea Queens into a time out. After the time out, the Sailors continued to dominate offensive possession, adding four more goals.

A nice moment happened after the game, as Knipp of Newport Harbor and Joslyn Simaan of Corona Del Mar both hugged one another after Simaan fouled Knipp with about five minutes remaining in the game. Simaan also apologized for the foul.

The Sailors (3-4, 1-0) have a quick turnaround, as they play at Los Alamitos today at 4:30 p.m. The Griffins (3-3, 1-0) are tied with the Sailors for first in the Sunset League and the winner will more than likely have the inside track on the Sunset League championship.

“They’re very aggressive. If there’s a ball running to the sidelines, they will hustle toward it. We have to play aggressive and up to our game,” Vickers said.

Corona Del Mar was led by Hailey Butcher who had two goals while Simaan, Caroline Brewster and Celeste Wayne each had one goal. Katie Langley made five saves for the Sea Queens.

“I think Newport Harbor is a good team. They have some really strong attackers, strong midfielders. I wish second half was a different half,” Sea Queens coach Jessica Murray said. “My girls didn’t stop fighting until the very end

The Sea Queens’ have a tough week next week, as they play Foothill at home on Tuesday and Los Alamitos at home on Thursday. The Sea Queens will not have the services of Simaan who picked up a red card late against Newport Harbor.