Valencia Strikes Late to Knock Off No. 19 Cate 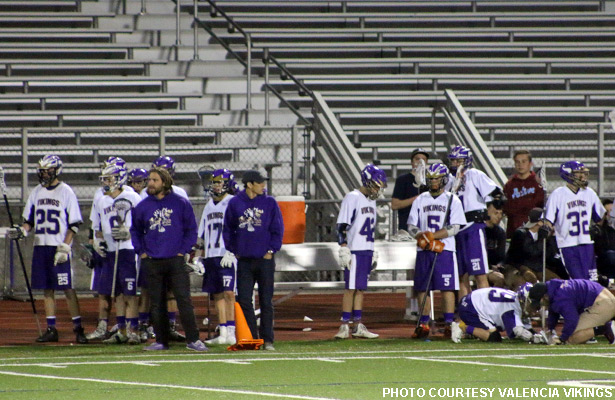 When visiting Cate, ranked No. 19 in the coaches poll, took an 11-10 lead with 2:23 to play Saturday, Valencia’s Tyler Thorne took matters into his own hands. The sophomore midfielder fed teammate Donovan Bolanos for the game-tying goal with 1:39 left, then stuck the game-winner from a tough angle with 50 seconds to play, lifting the Vikings to a 12-11 victory.

Valencia (2-3) opened the season with a victory over Redondo Union and moved into the coaches poll at No. 20. But consecutive losses to Skyline (Utah), Thousand Oaks and Oaks Christian dropped the Vikings right back out again. That made beating Cate all the more important.

The Vikings controlled possession behind sophomore Josh Vizcarra, who won 20 of 26 draws and collected 12 ground balls. He also scored one goal and assisted on another. Junior goalie Adam Cowan had a breakout game with 13 saves, eight in the second half.

Aside from the face-off dot, the teams were evenly matched in most areas, including clears (Cate 21 of 27; Valencia 33 for 42). Each team showed efficiency on extra-man opportunities, with Cate going 3-for-6 and Valencia scoring on 2-of-5 man-ups. Cate outshot Valencia 36-28, while the Vikings controlled loose balls and the possession game, 34-26. Cate senior Cole Brennan led all scorers with 3 goals and 3 assists.

“The Rams gave us a great game, and we look forward to making this an annual contest,” Valencia coach Nolan Godfrey said. “Adam showed strength in the cage, and Josh did the same on draws. Our boys showed resilience when it mattered most, and this is a good turning-point win going into next week.”

Valencia plays at El Segundo on Monday and at Agoura on Friday next week.