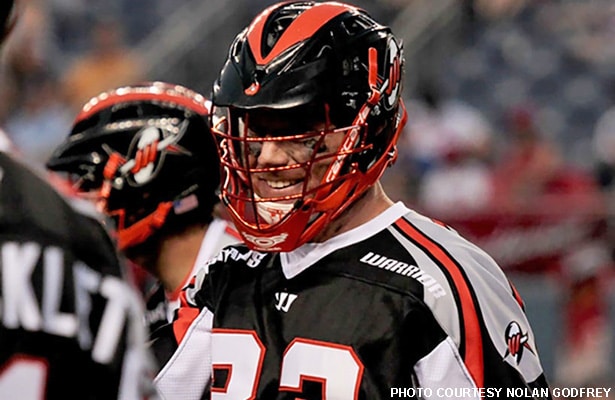 A seven-year veteran of Major League Lacrosse and Canadian box lacrosse, Nolan Godfrey has been named head coach for both boys and girls lacrosse at Valencia High School (Santa Clarita).

Godfrey is en route to the Los Angeles area this week to begin working with the Vikings, as well as to launch new programs with his Top Tech Lacrosse company. Among those programs is the brand-new Valley Box Lacrosse League, which opens this weekend in Santa Clarita and Camarillo.

The Valencia program is entering its third season of CIF-sanctioned play, having gone 6-10 and 9-9 in its first two seasons under coach Bill Adams. The Vikings roster last spring featured 15 freshmen and sophomores and graduated only five seniors, giving Godfrey a solid foundation to work with.

An NCAA All-American midfielder and faceoff specialist at Merrimack College, Godfrey led the nation in ground balls as a senior. He then went on to play for a handful of teams in Major League Lacrosse, but he found his true calling in the Canadian box arena, where he played most recently with the Nanaimo Timbermen Senior-A club of the Western Lacrosse Association. He also played with Team USA Indoor at the 2008 Warrior Cup in Six Nations, Ontario.

An experienced coach as well as player, Godfrey also is something of lacrosse ambassador, having coached internationally in Spain, Italy, The Netherlands, Switzerland, Scotland and Finland and domestically at the high school levels in his home state of Massachusetts, as well as Texas, and at the collegiate level with D-I UMass, D-II Saint Anselm College and MCLA champion Grand Canyon University.

Godfrey took time out from his cross-country drive Monday to answer a few questions via email:

I understand you have ties to San Francisco; any ties to the L.A. area?

From last February and on, I was up in the Bay Area coaching lots of draw specialists through our FaceOff Club training, as well as working with several different youth and high school programs. There’s a ton of great talent and enthusiasm up there for the sport and an abundance of skilled and experienced coaching. It’s been my pleasure to assist several players and families through the college search process with our CAPS Recruiting services and helping them gain top NCAA and MCLA commitments.

Previous to that, I’d spent much of the 2014 fall and early 2015 winter in SoCal, surfing and training players, some of whom are now at the college level. Same for the prior 2013-2014 winter — from September through March, I was out West a lot more than East. I’m very familiar with both the geographical and lacrosse landscapes of SoCal and enjoy being around both.

When do you anticipate being in place and actually coaching the team? Or is that happening now?

I’ve been back East the first part of this Fall renovating my mother’s new house and getting ready for the relocation to SoCal. This week, Coach Donnie Bowers (the new Calabasas HS head coach and my Top Tech Lacrosse partner) hit the road and are en route out West in my Dodge diesel. The trip is 3,500 miles and represents our level of commitment and investment to our respective programs and the SoCal lacrosse community as a whole. We couldn’t be more excited and thankful.

Valencia HS assistant coaches Mark Bell and Taylor Ehret have done a great job with the players during their fall practices. We will start up our Top Tech Lacrosse (toptechlax.com) programs this weekend, leading in first with our Valley Box League and Top Tech Select winter club tryouts. From then on, it will be coaching players up non-stop with endless positivity! Lots of sweat and lots of stoke. We will have many Vikings players in our programs this winter (as well as other area players), and all will be very familiar with our vibe, expectations and system. That will put us miles ahead on a progression of momentum.

A side note about Donnie: I first encountered him 12 years ago as a relentless NCAA opponent. Later, we were the closest of teammates on the same Canadian box team and have remained great friends ever since. He is one of the best men I’ve ever known, and the way his friendship helps make me a better man is a perfect example of what we tell players — iron sharpens iron, and it’s in our best interests to surround ourselves with others who share our same values and mission. Lacrosse has expanded immensely in the last decade, yet it’s critical that young players know how very special the sport of lacrosse is and the instrument it is for our lives.

What attracted you to this opportunity?

Valencia was actually one of six different high school programs I entered the hiring process with between May and September in both the Bay Area and SoCal. Several of them were very compelling, with strong winning traditions and on the cusp of national-power status. I was very deliberate and careful in this search, as it was so much more about finding a place where I wanted to set indefinite roots and start a family, in addition to a high-integrity lacrosse culture, rather than just a place to coach next spring and see how it goes. At this point in my career, I know exactly what I do want and also what I don’t.

Each group I interviewed with was transparent and honest with me, and I was the same with them. My criteria was simple:

Have you met with the team yet? If so, what do you think? If not, when do you expect to?

Many of our Valencia HS players are playing in the Top Tech Valley Box League and trying out for Top Tech Select winter club, so I will meet them this week for those events. I’ll also be checking them out in the LA Mavericks Fall League on Sunday at Agoura. Next week, we will have an initial meeting where I’ll have the pleasure of meeting each one of them and and their families. I’ll familiarize them with core components of our cultural mission and display my sincere gratitude and enthusiasm for what lies ahead with them. Throughout my career as a player, it was never an “if,” but simply a “when” concerning my eventual success, as I trusted 100 percent in my relentlessness and commitment to my goals. The Vikings will adopt this confident and faithful mindset as we get better every play, every day and treat it all with privilege, honor and gratitude.