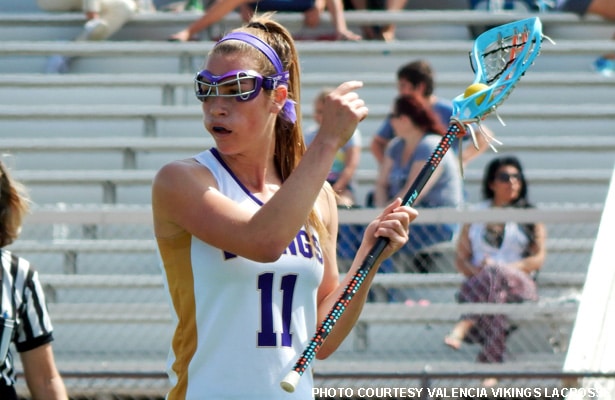 The Valencia Vikings swept two road games in Northern California over the weekend, beating Stevenson (Carmel) 14-10 and Los Altos 17-3 to improve their record to 3-2-2 in the first year of the program. The team has tapped into major scoring output from its midfield and has now won three of its last four as the Vikings state their case for a playoff berth in May.

“Our girls continue to have lots of fun while displaying high passion and effort this season,” coach Nolan Godfrey said. “These two team wins make for a good weekend and lots of motivation the rest of the way.”

Junior midfielder Kayla Konrad posted 11 goals in the two weekend games, scoring on six of eight shots at Los Altos on Saturday. She was also recently named the Player of the Year for girls basketball in the Santa Clarita Valley. The junior standout has put up 25 goals in seven games this season.

On Friday at Stevenson, the Vikings trailed 4-3 at the half, only to put forth an 11-goal second-half outburst to run away with the win. Valencia’s pressure defense was far too much for the Pirates as time went on, and the dominant possession game resulted in 39 shots for the Vikings. Senior defender Lani Linzy added a goal and an assist on top of leading the Valencia defense.

Valencia regroups with a week of practice before taking their winning streak to Crescenta Valley on April 19.