Valencia Girls Win Fifth in a Row, 8-4 Over La Canada 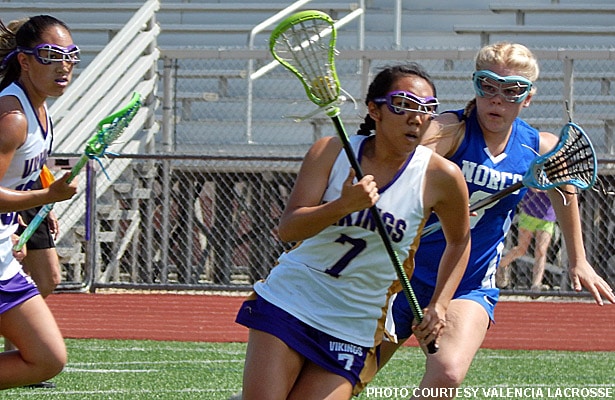 For the second consecutive game, Valencia scored on its first two possessions for an early lead that would hold up the rest of the way. Monday, Kayla Konrad and Mandy Yamamoto put the Vikings up 2-0 a minute into the contest, and Valencia — ranked No. 20 in this week’s US Lacrosse/MaxLaxLA coaches poll went on to beat La Canada 8-4.

Yamamoto scored three goals and Konrad had four, as the midfield teammates led the way.

Valencia (6-2-2) extended its first-half lead to 5-0 before taking a 6-1 edge into the half. The Vikings continued to play suffocating defense through the second half and held an 8-2 advantage until yielding two goals in the game’s final minute.

Sophomore attacker Kiki Shakir added a goal for the Vikings, and freshman Marissa Hasseman had six saves in net.

Valencia has now won five consecutive games and six of its last seven. The Vikings close out the regular season at home on Tuesday against Westridge.