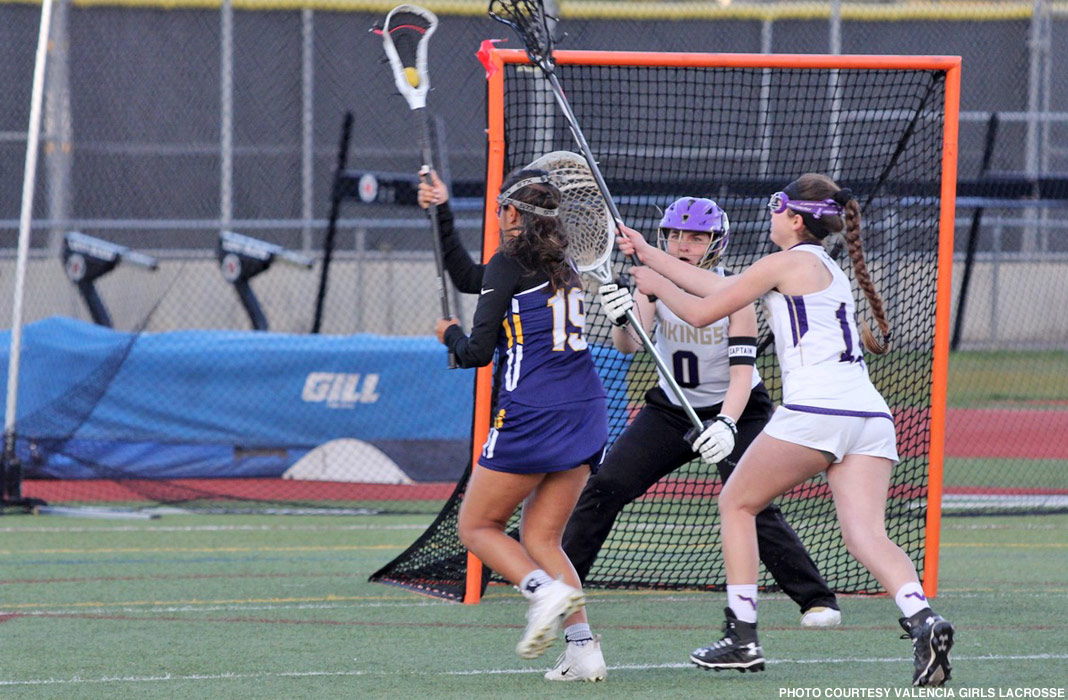 Katie von Mecklenburg won three consecutive draws midway through the second half Friday, turning those possessions into two goals and an assist and propelling host Valencia to a 12-9 victory over No. 16 Birmingham.

That flurry gave the Vikings (8-3) an 11-7 lead and some breathing room in a game that had been back and forth throughout. Von Mecklenburg’s goals were her fifth and sixth of the game, and her assist set up Kat Lin (4g) to score her third.

Birmingham (7-5) led 2-0 early in the game behind goals from Aryana Zakeri and Zella Bedoian, who finished with six goals for the Patriots. But Valencia tied it 2-2, and it was tied again at 4-4 and 6-6 before von Mecklenburg pushed the Vikings ahead 7-6 with just under two minutes left in the half.

The Vikings’ defense, anchored by senior goalie Marissa Hasseman, limited Birmingham to only three goals in the second half. Hasseman finished with nine saves.

Early in the second half, Hasseman stopped a point-blank shot, then grabbed a pass off of the rebound. After the Vikings turned the ball over in transition, Hasseman stopped a free shot, stole another Patriots pass in front of the goal and cleared to Lin. That started the transition for the Vikings, with Lin sending a pass downfield to Sydney Sullivan, who fired a pass to Jenny Elliott, who buried it for an 8-6 lead.

Bedoian scored her fourth of the game to bring Birmingham back within one at 8-7 with 16:30 to play, but that’s when von Mecklenburg took over.

She won back to back draws and scored each time, giving the Vikings a 10-7 lead, then won the next draw and fed Lin for a goal that gave the Vikings a comfortable, four-goal lead at 11-7.

After Lin scored to make it 12-8 with 8:04 left, von Mecklenburg won another draw, and the Vikings slowed the game down, maintaining possession in their offensive half and running the clock. Bedoian did score again, making it 12-9 with two minutes to play, but von Mecklenburg won yet another draw — she won 15 of 23 in the game — and Valencia closed out the win.

Information and photo for this report contributed by Valencia Girls Lacrosse.