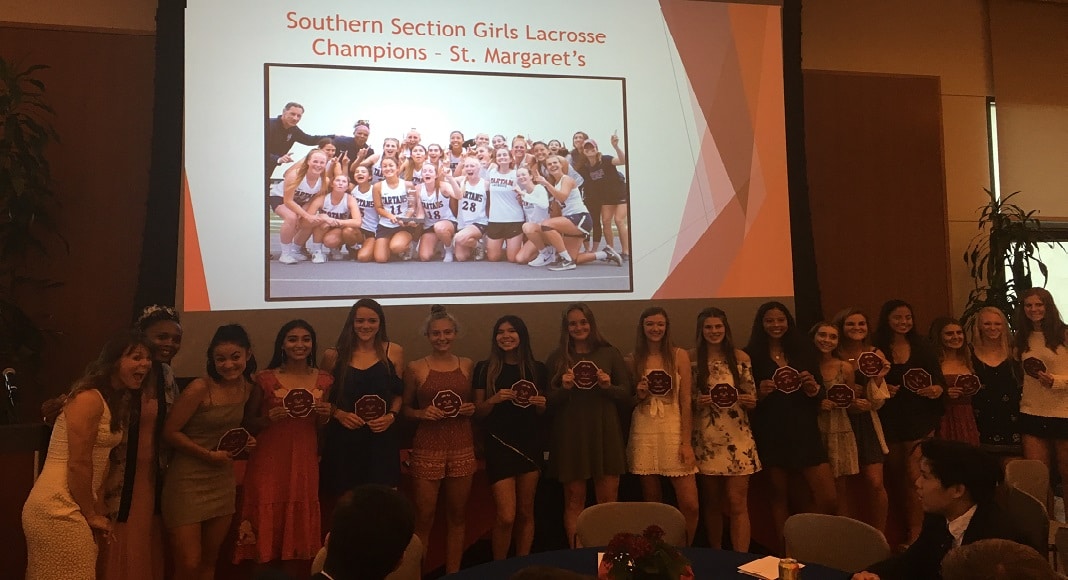 The Orange County Chapter of US Lacrosse celebrated the 2018 season with the third annual End of Season Banquet on Sunday evening at the Bell Tower Regional Community Center in Rancho Santa Margarita.

USL-OC President David Upshaw and Girls’ Lacrosse Chair Lauren Ciccomascolo emceed the event in front of a packed house of enthusiastic lacrosse fans who showed up to cheer on the 2018 champions and award winners and enjoy the ribs and chicken from Newport Rib Company.

In addition, to the St. Margaret’s girls (pictured above) and boy’s lacrosse teams (pictured below), the All-County teams, All-Americans, All-Academics, Players of the Year, Coaches of the Year, Jackie Pitts award winner, and Bob Scott Award winner were honored. 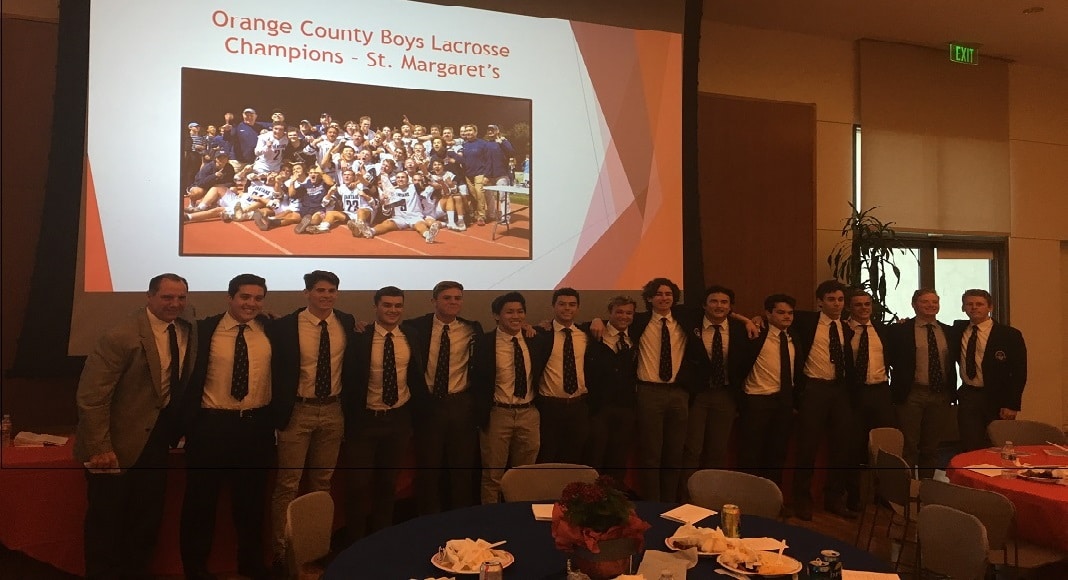 Girls’ Lacrosse Player of the Year Cailin Young was introduced by her coach Holly Reilly. Reilly noted that Young, who also plays soccer, was one of 14 multi-sport athletes on the St. Margaret’s team, and emphasized Young’s ability to inspire her teammates and make them better players.

“Almost every single coach in Orange County has impacted me one way or another, even some on the boys’ side with Nick Tintle and Glen Miles,” Young said. But most importantly, all the different players, the ones on St.Margaret’s and [off], they’ve all become my best friends, and that’s the one thing I’ll remember most.”

Boys’ Lacrosse Player of the Year Kevin Groeninger was introduced by his coach Glen Miles.  Miles spoke of Groeninger’s love of the game, his dedication to perfecting his play, and his ability to recover from off-season shoulder surgery that caused him to miss the soccer season.

“It’s a really big honor for me. It [the award] means a lot for my lacrosse career. I’ve been working really hard and I feel like it’s a testament to the hard work I’ve put in off the field,” Groeninger said.

Aliso Niguel coach Dave Elkins introduced Jackie Pitts Award winner Quinnlyn Mason. The Jackie Pitts Award recognizes a graduating senior in each chapter who truly honors the game of lacrosse, is invested in the development of the game in her community, is an exceptional player who continually strives to improve her game, and is an exemplary member of her team. She exemplifies the spirit of the game, on and off the field. Academically, she is an outstanding student and a valued role model in her school.

“I was really surprised and honored to be given this award. I can say I definitely started at the bottom, but I’ve worked my way up and honestly, the past four years have been the best of my life so far. Becoming friends with all the other girls, they’re definitely my closest friends and I think that just like giving back and training younger girls and helping out my younger teammates has really helped grow the game at least in our Orange County area,” Mason said.

Michael Walsh of Santa Margarita received the Bob Scott award for exemplifying the fundamentals of lacrosse, working hard to improve his game and being a leader on and off the field. Walsh battled through a toe and shoulder injury, but helped Santa Margarita win the Trinity League and advance to the county semifinals, where it lost to eventual champion St.Margaret’s.

“As a program and when I’m playing with my team, I really do try to embody everything that the Bob Scott award entails. I’ve been playing lacrosse since the third grade and throughout this entire journey, I learned that you need to be a person as an endless motor and be willing to work through a lot of adversity and that really showed up this year when I hurt my shoulder and broke my toe, which was a big dent to my senior season. Going through these kinds of experiences helped build me not only into a better lacrosse player, but a better individual,” Walsh said.