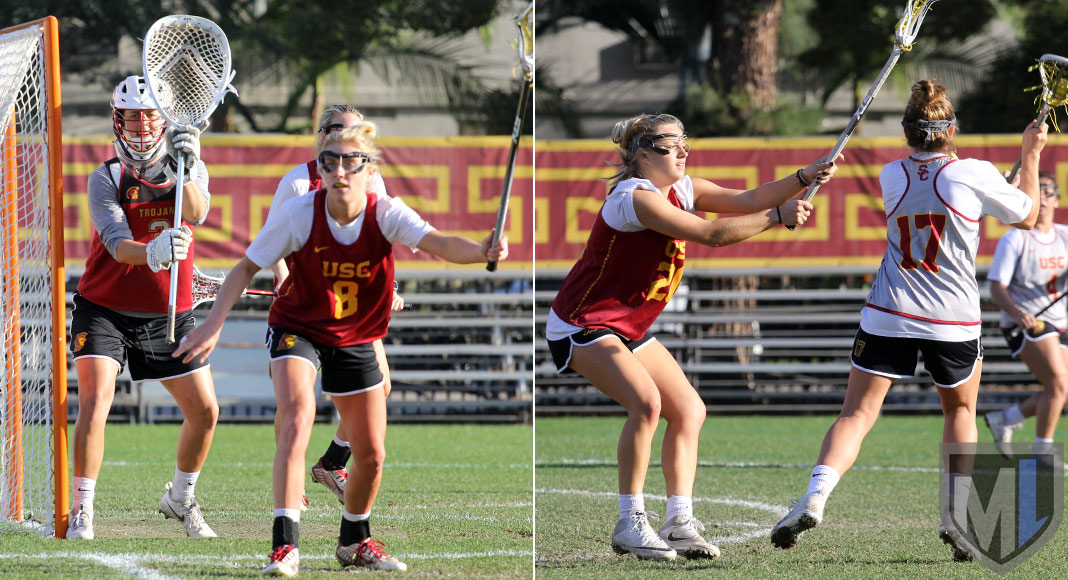 At first glance, the USC women’s lacrosse team appears ready to pick up right where it left off a season ago, when it went 18-4, reached the NCAA Tournament quarterfinals and finished No. 8 in the nation. A closer look, however, reveals a team clearly in transition but perhaps still talented enough to continue the program’s upward trajectory.

Seven starters and 19 letter-winners return for the Trojans — who were ranked right where they finished last year, No. 8 in the 2018 IWLCA preseason poll — including all-conference goalie Gussie Johns and third-team All-America defender Lydia Sutton.

“I think every year is different,” Munday said, “and it’s always a challenge, but it’s really exciting when you have a young group and graduate a lot, because there is so much opportunity for people to step up and create a different identity than you’ve had in the past. You have different players and different strengths, so it’s been really fun to see the different units, both offensively and defensively, come together and create that identity and embrace being a different team, because we’re not the same, and I think if you can buy into that, it’s really fun.”

Still, with 14 newcomers to the roster, including fifth-year transfer Maeve McMahon (Harvard), there are a lot of players being asked to take on new roles for the Trojans.

“It’s great that we’re a spring sport, so we had all fall to kind of figure that out,” Munday said, “but it’s going to be a process. Every year is. But with a young team, it’s just really exciting, because we can look at this group right now and know that we’re going to continue to get better, which is all you can ask for as a coach.”

Offensively, sophomore midfielders Kerrigan Miller (36 goals, 18 assists, MPSF Rookie of the Year) and Kaeli Huff (29g, 3a) are the top returning scorers, and transfer attacker Maeve (26g, 8a for Harvard last year) adds some experience. Munday said she expects this team’s offense to be a group effort, with everyone stepping up to replace the production lost to graduation.

“This group, when they move the ball well, and they’re playing with each other, they’re pretty hard to go against,” she said. “I think this group is really embracing that, that we’re not trying to replace one scorer or two scorers. We’re trying to be the best unit that we can be and really just move the ball as fast as possible and work with each other.”

With Johns (8.53 goals-against, .464 save percentage) in cage and Sutton (35 ground balls, 27 caused turnovers) anchoring the defensive unit, the Trojans have two veteran leaders helping keep the rest of the defense on point.

“There’s going to be a lot of people on the field that might not have seen a ton of time last year,” Munday said, “but that group is really jelling together, and there’s just tremendous leadership on the defensive end with Gussie and Lydia, so that really helps.”

The Trojans’ first test comes Saturday, when they open the 2018 season at Virginia Tech (9 a.m. PT), the first time USC has opened on the road.

After that come four consecutive games against ranked opponents, starting with a matchup with No. 2 Stony Brook in the Orange County Lacrosse Showcase in Costa Mesa. Then come games at No. 15 Notre Dame (Feb. 23) and No. 11 Northwestern (Feb. 25) before the team’s home opener March 7 against No. 6 Boston College.

“To be honest, we always want to play the best people we can,” Munday said, “because no matter what, it’s going to give you a gauge of where you are and it’s going to put you in situations that are going to help you down the road.”

Once USC is through the tough opening month, it will head into the first season of Pac-12 Conference play. With Arizona State beginning Division I play this year, USC, Colorado, Stanford, Oregon, California and ASU will compete for the first Pac-12 championship April 26-29 at Colorado. USC was voted the Pac-12 favorite by conference coaches.

“Conference games are what you want to focus on,” Munday said, “because if you win your conference you get an automatic bid to the tournament, but we have great teams in our conference, so we have to make sure that these first games are going to prepare us for those conference tests that we know we’re going to have.”