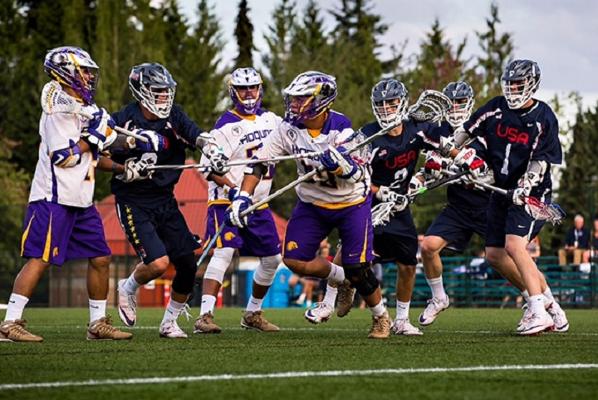 COQUITLAM, B.C.. — The United States faced adversity for the first time in the 2016 Federation of International Lacrosse U19 Men’s World Championship<http://www.2016worldlax.com/>, but responded for a 17-3 victory over the Iroquois Nationals behind a dominant faceoff performance. The victory clinches the No. 1 seed for the U.S. (3-0) and a bye into the semifinal round. The Iroquois fell to 1-2 entering tomorrow’s game against Australia that will determine the No. 3 seed in the Blue Division. Canada (3-1) has wrapped up the No. 2 seed.

Austin Staats scored the first two goals of the game for the Iroquois Nationals, and the U.S. was hit with a three-minute non-releasable penalty while trailing by the two goals. The Team USA defense killed off the penalty and Simon Mathias got the U.S. on the board midway through the first quarter. Staats got his third goal of the game with 5:42 left to give the Iroquois a 3-1 lead after the first quarter.

That would be the last goal of the night for the Iroquois as the U.S. scored the final 16 goals of the game, frequently playing make-it-take-it with a 21-of-23 performance on faceoffs. Austin Henningsen won 12-of-13 and Christian Feliziani won 8-of-9.

Mac O’Keefe scored less than two minutes into the second quarter and Jared Bernhardt tied it up soon after. Dox Aitken’s goal with 9:44 left in the first half gave the U.S. a 4-3 lead and they never let up. Alex Roesner and O’Keefe scored to give the U.S. a 6-3 halftime lead, and then the U.S. ripped off four goals in the first 5:22 of the second half to completely seize momentum against an Iroquois squad that lost a hard-fought battle against Canada the night before in a game that was delayed multiple times and ultimately played on three fields due to issues with the lights.

Roesner led the U.S. with five goals, O’Keefe had four goals, Mathias had three goals and two assists and Brad Smith had three assists. The U.S. goalies were rarely tested after the first quarter. Willie Klan started and played the first three quarters, making one save while allowing three goals. Philip Goss played the final quarter, but did not see any shots on goal.

The U.S. was whistled for three penalties for five minutes of penalty in the opening quarter, but the Iroquois failed to convert any of the chances.

The U.S. will have its first back-to-back games of the tournament when it plays England on Tuesday at 7 p.m. (Eastern) in its final pool play game.