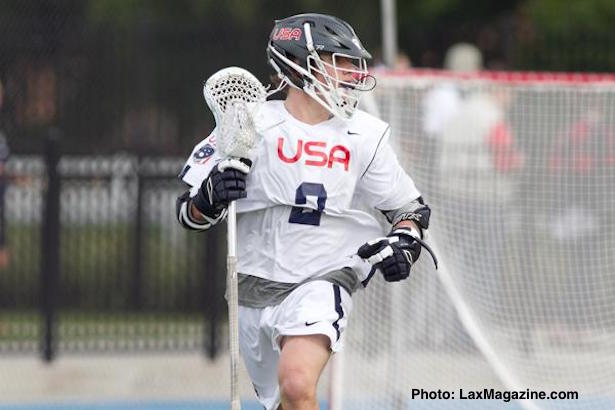 Team USA defeated Australia 23-1 to advance to the championship game of the 2016 Federation of International Lacrosse Men’s U19 World Championship.  Once again Hugh Crance (Corona del Mar High School) and the USA defense held the opponent to the low single digits.  The defense is allowing less than four goals per game in the tournament.  Team USA will play the winner of tonight’s Canada-Iroquois Nationals game.  You can watch Crance and the rest of  Team USA play for a world championship Saturday at 4:00 pm  at sportscanada.tv/2016worldlax/<http://sportscanada.tv/2016worldlax/>.  The following game recap is provide courtesy of US Lacrosse.

COQUITLAM, B.C. — Seven different players scored multiple goals, led by Alex Roesner with five, as the United States dominated Australia 23-1 to advance to the championship game of the 2016 Federation of International Lacrosse Men’s U19 World Championship<http://www.2016worldlax.com/>. The U.S., the only nation to have won the championship since the event’s inception in 1988, will go for an eighth straight title on Saturday at 7 p.m. (Eastern) against the winner of tonight’s Canada-Iroquois Nationals game.

Tyler Dunn scored just 2:21 into the game off an assist from Roesner and the U.S. never got off track. The U.S. led 7-0 after the first quarter, 12-0 at the half and 15-0 into the third quarter before Australia’s Sean Clarke scored his team’s only goal with 14:43 remaining in the third quarter.

Roesner (5g, 1a) and Michael Sowers (2g, 4a) led the U.S. attack with six points each, and Dox Aitken and Mac O’Keefe each had hat tricks. Aitken scored three of Team USA’s first nine goals. Jared Bernhardt (2g, 2a), Austin Sims (1g, 3a) and Ryan Conrad (1g, 2a) each had at least three points for the U.S. as well.

As it has done all tournament, Team USA controlled the faceoffs with Austin Henningsen and Christian Feliziani doing the damage. Henningsen won 7-of-11 and Feliziani winning 6-of-10. Willie Klan got the start in goal and played three quarters while making two saves and allowing just one goal. Philip Goss played the final quarter and blanked the Aussies while making one save. Australia went 0-for-6 on its extra man chances.